Continuing the themes of Mistaken Identity and Spicy Chihuahuas, Neil Lurssen reminds us that some things you just have to learn on your own. Herewith, Neil’s take on Beagles and a shelter Chihuahua he once befriended:

At a shelter like ours you can learn all sorts of stuff about dogs from trainers who have strings of letters behind their names that show how well trained they are themselves. I don’t have any of those letters behind my name but I want to pass on some useful things I have learned for myself down the years. You won’t get any of this from the pro trainers.

Firstly, if you ever adopt a Beagle, be sure to get a collar or a harness that is so ridiculous that nobody else would buy one. Put a stupid ribbon bow around his neck with big red dots on it. Mark the top of his head with lipstick. These moves will be useful at one of those gatherings that are popular with Beagle owners. They hold Beagle Fests that are attended by hundreds of Beagles. If there were a big enough venue, thousands would turn up.

I learned this for a fact when Marin Humane had a cute Beagle up for adoption and I – a new dog-walker at the time – asked permission to take him to a Beagle Fest that I had heard about at the Sausalito dog park. Sure, they said, have fun. When I got there, I unleashed him and he ran joyfully into the milling mob of his cousins, aunts and uncles – all charging around the park, wailing and baying while their guardians stood about in groups snacking and talking Beagle stuff.

I realized at once that I was in very deep trouble. The dogs were everywhere and were all identical. I had no idea which was mine.  I had no Plan A, Plan B or Plan C.  Plan D offered some options. I could hang around until evening when everyone went home and the last dog standing must be mine. Another option was to take any one of the Beagles back to the shelter and hope that nobody could tell the difference. Yet another was to announce on the PA system that all owners were to recover their own dogs immediately because of an emergency. None of these plans was appealing.

Then I remembered my fellow dog-walker Evie. She emerged suddenly in a golden cloud as my guardian angel. It was Evie’s habit to write the names of shelter dogs on blue painters’ tape and to wrap the tape around the shelter harnesses. I hoped my Beagle was wearing such a named harness. If so, all I had to do was track down a pooch wearing a blue tape with his name.

It took a long while, but eventually I found my guy having a good time with his pals. He had his blue tape and I leash-clipped him with a mighty sense of relief. Sorry pal, I told him, party’s over  I never did tell the shelter high-ups about this. I thought I would wait until some years had elapsed. My philosophy was to get some credit points first – and then admit to silly misunderstandings. I come clean today.

My point is that my Beagle should have stood out in the crowd – with a disgustingly-colored coat, harness, collar or bow-tie. Maybe his ears held up with elastic bands.  Anything that nobody else would be seen dead putting on their dog.

The same principle applies to other breeds where all the dogs look like each other. Don’t go to a Dalmatian Fest unless you know exactly how many spots are on your Dalmatian. I could go on about other breeds like Pugs and Rottweilers but I don’t want to offend readers by suggesting that their pets are not special in the way they look. I won’t go near Peke people. They will tear you apart if they don’t like what you say about their dogs.

Anyway, you won’t ever learn about stuff like this from the pro trainers. They don’t teach it in dog school.

Here is something else they won’t teach you: Don’t ever disturb a Chihuahua when he is enjoying a pig’s ear. It is a recipe for big trouble. This lesson from the realities of shelter life also came during my rookie dog-walker days when I was asked by an adoption counselor to fetch a Chi from his run and bring him to the lobby. Somebody wanted to see him. 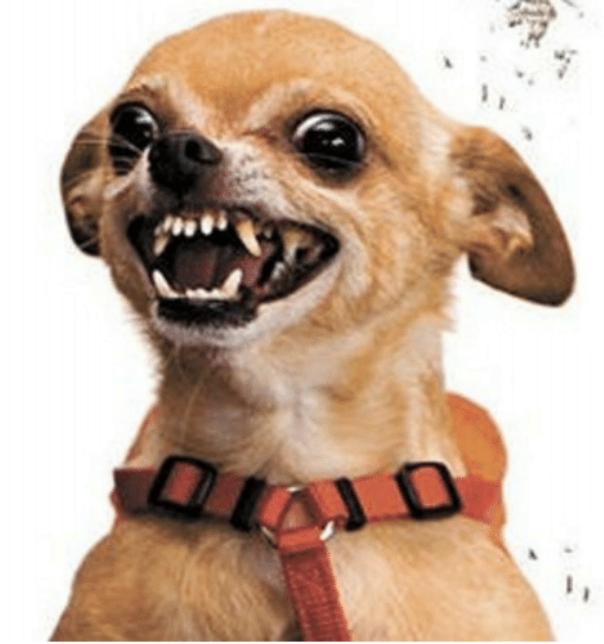 I found him munching on one of those dreadful dried pig’s ears that was almost his size. Operating from the happy depths of ignorance and over-confidence I reached down to pick him up and was met by two glaring, rage-filled eyes and a set of fangs that would have done a Tasmanian Devil proud. I had always viewed the Chihuahua as the goldfish of caninehood. This one was a piranha. His snarl sounded like a needle dragged across a rap vinyl.

Before I could come up with another plan, he sank his fangs into the web of my right hand between the thumb and the index finger. With teeth honed by their work on the pig’s ear he hung on, dangling from my hand and refusing to let go even as I shook him up and down like a yo-yo. Eventually, I got the snarling vise open and carried my quarry, still furious, to the lobby – hoping that I wouldn’t look too damaged. However, my blood and suppressed anguish and his bad mood were noted right away.  People stared at me with unsmiling eyes.

Getting bitten is serious business at a shelter. By county law, it involves paper work, reports and possible consequences for the dog – like a period of isolation called bite-quarantine. I tried to explain that it was all my fault, that the Chihuahua was the innocent party, that it was nothing really, that it was only a little bit agonizing, that everyone – and every dog – deserves a second chance. Just a scratch, I grimaced.

But the little guy went into the slammer anyway – the shelter’s version of it – meaning that volunteers like me could not take him out for the next 10 days and only the busy animal-care staff could handle him. Because of me they now had to do what I and others had volunteered to do for them. I had to fill out an official form for the accident committee and satisfy them that I would survive.

I felt terrible about it. At a time when the pint-sized orphan needed all the love and support he could get to wean him from his wicked ways, my stupidity had stolen 10 important days and made him even angrier.

We both healed nicely. After a decent period I could go back to strumming the five chords I know on my guitar and the Chihuahua was adopted by a loving family that I certainly hope allowed him to chew things without interruption.

When you sign up for one of the many classes offered at Marin Humane you will learn great dog handling skills taught by some of the best pros in the business. But some things you will learn only from your own experiences. Be careful at Special Breed Fests and don’t mess with a canine pipsqueak and his pig’s ear.  The latter could ruin your guitar playing.