We all see our pet dogs twitching while they sleep – legs shaking, eyelids fluttering, tails giving a wagging, an occasional growl or whimper. Sometimes there is even some suppressed barking. Is this just a keyed-up canine body winding down?  Or is your dog dreaming?

Yes – dogs do dream, and the scientists say they can prove it.   They say that most vertebrates with spinal columns – about five percent of all living creatures, including you and me – can and do dream. They set out to demonstrate it with the help of lab rats, noting that if rats and humans can enter dreamland, so can dogs.

Using tiny electronic devices, they monitored the brain waves of the little critters during two separate periods-  the first as the rats were running around mazes, figuring out ways to get to the treats that were waiting when they solved the puzzle.  The second was when the rats were sleeping after all that running about.  Just like us, rats and other mammals including dogs, experience different sleep cycles in which slumber is experienced at different levels of intensity. The scientists used those cycles.

An important phase they tapped into was the REM cycle – which stands for Rapid Eye Movement. This is the sleep cycle when most dreams occur and the mind is dealing with the memories of the day’s events and thoughts. Scientists have delicate equipment that can measure brain activity during REM and other cycles. 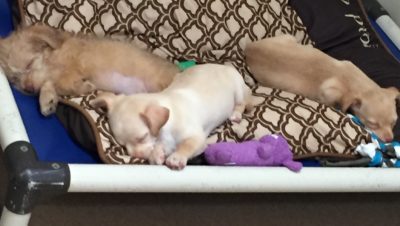 First they observed and recorded brain activity when the rats were scrambling around in the maze seeking their food prizes. During this activity, the brain reacted according to the success or failure of particular moves made by the rats.  Then they recorded the rats’ brain waves later during their REM sleep cycle, the results of both monitoring sessions appearing graphically on a screen. By comparing the two sets of images, the scientists could tell that the sleeping rats were dreaming about their adventures in the maze – turning this corner was no good, that one worked out OK and so forth. 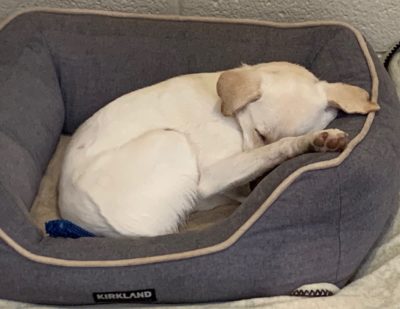 In a report on this experiment, the American Kennel Club noted that researchers at the Massachusetts Institute of Technology concluded that animals’ dreams can be complex and detailed as they relive what they did during the day.  I believe that to be true, as I will explain later.

So what do dogs actually dream about when they shake, rattle and roll in their sleep?  The answer has to be partly conjecture, of course, but those of us who spend a lot of time with dogs, our own and others, have a pretty good idea of what motivates them.  Because we know them so well, we all know what our dogs think about most of the time.

My two dogs are devoted to my wife and me – as yours are to you and your family – so it is very likely we appear in their dreams.  Their other chief obsessions are food, hiking the Marin trails, chasing the neighborhood cats, being outraged by anything, bird or insect, that has the effrontery to fly, traveling in the car and then food and more food.  These matters surely dominate their thoughts.  Some of my dogs in the past have been obsessed with chasing tennis balls and we once had a Lab who couldn’t walk past a stretch of water without plunging in.  Food for their dreams.

We have to assume too that doggie dreams have events and story lines just as human dreams do.  Things happen in our dreams, so why shouldn’t they occur in our pets’ sleep?  Anybody who has lived with a dog will have seen complex and nuanced behavior that suggests fairly sophisticated thoughts and decision-making. I don’t believe it is only instinct-driven as appears to be the case (at least partially) with Border Collies and their shepherding skills.  So if they can think about things in a cognitive way, it seems likely that they can also dream about things happening.

Let me give two examples of sophisticated thinking in dogs that suggest the existence of nuanced dreams:

I was fortunate enough to grow up in a city that had its own mountain right on its doorstep.  My friends and I played on a foothill near our house and a neighborhood dog named Ranger who was allowed to roam as he pleased would sometimes join in our games when we built forts in the bushes and raided each other’s strongholds.   He had a home. He was no stray.  Ranger would just appear.  He was one of the gang.

As we got older we started to climb the mountain itself  – which involved going up rock faces.   Ranger once saw us as we headed for a gorge and we had to chase him away because he couldn’t manage the rocks.  As we approached a difficult part of the climb, we became aware we were being stalked.  A little tuft of brown hair or the tip of a tail would stick out from behind a bush. Then disappear.

We set an ambush behind some boulders – and up ran Ranger.  He had been following and hiding, figuring he could join in eventually if nobody saw him.  If he showed himself earlier he would be chased away again.  So we harnessed him with a rope and dragged him up the rocky gorge, our clever and sneaky pal.  Ranger was a thinker.

Another example of a thinking dog that stands out for me was the subject of an earlier blog here – Hunter, a Malinois that is employed today as an anti-poaching dog at a rhino orphanage in the South African wilderness. His job is to search for abandoned rhino calves whose mothers have been slaughtered for their valuable horns.  But he does more than track the babies.  He senses when they are traumatized – and he actually tries to comfort them.  And they respond to him.

His handlers told us that nobody ever taught Hunter to do that.  He chooses to do the comforting himself.  He too is a thinking dog.  Does he dream about the animal orphans he helps?  Maybe.

If humans are subject to nightmares it is probable that our dogs are too.  A number of authoritative articles on this subject warn against the temptation to awaken a dog apparently having a nasty dream.  There is a danger, they warn, that a dog, while half asleep, could bite in a reflex act if they feel they are being attacked.  In most cases, I believe, it takes a while for humans to recover from a horrible dream.  They same must be true for dogs.  In fact, a report by the VCA notes that 60 percent of all reported dog bites occur when a dog is being shaken awake.  It is especially dangerous when children do it. 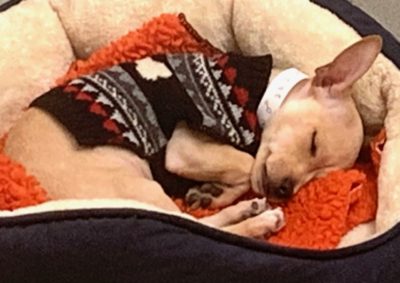 The AKC’s suggestion is that if your best pal is having a nightmare, let them wake up undisturbed and then provide the comfort and reassurance they all thrive on.  That’s where the phrase “Let Sleeping Dogs Lie” comes from.

A final note: Humans can also be dangerously aggressive when shaken awake.  In the old British Royal Navy, it was a capital offense for an enlisted sailor to strike an officer.   But this rule was not applied when sailors were shaken awake in their hammocks at their start of their watch.  They were given a period of grace in which they could smack an officer and get away with it.  Think of that when Fido is disturbing your sleep with his grunting and fussing and you want to shake him to stop.