Dog people can and do argue about many things – but there is one thing about which we all agree:  we all share a deep disdain for those among us who are antisocial about poop.  It’s our responsibility.  Pick it up!

I am referring here to those awful dog-walkers who don’t pick up on hillside trails, beaches, sports fields and other public places.  We have all glared at these people – and they really don’t care a hoot. They give us all a bad reputation and I suspect they were the real reason why the Golden Gate Recreational Area tried so hard and persistently to banish our dogs from their parks and trails a few years ago.    The Golden Gate people wanted us to think that blue butterflies were in danger.   I can’t help feeling that was just an excuse.

There is a special place in the afterlife waiting for the non picker-uppers.   I believe they will be mortified when they find themselves in a place buzzing with flies; it won’t smell so grand down there – and newcomers must be excruciatingly careful where they walk.  Barefoot. 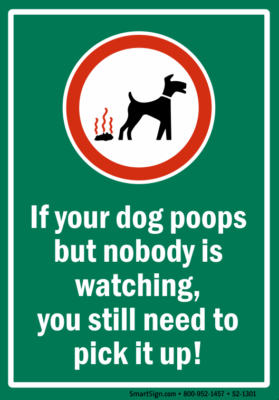 There is one fellow in particular who is a well-known offender on my local Marin trails.  He is a “professional” dog-walker who has managed somehow to accumulate a bunch of clients.  One of his props is the collection of poop bags attached to his leashes.  I think he never uses them.  They are there only for show, for pretending he is a fine fellow.   I confronted him about his poop perfidy and I heard from other walkers later that he called me “that arrogant old English trouble-maker”.

Let’s get the record straight here – I am not English.

But a look at the positive side of poop:  One of the most useful things I was shown as a rookie volunteer at the Marin Humane shelter was a large chart with about a dozen color pictures of dog poop varieties.  Each picture had a detailed caption explaining why the poop looked the way it did, the significance of its color, the importance of its texture, and what a vet would look for in it.

Although it was unusual and quite colorful, it was not exactly the kind of wall illustration one posts in one’s living room at home, but it taught us a lot about what to look for when we exercised dogs on the shelter campus.  In fact, an important function of a dog-walker is to monitor poops on our rounds.  (Incidentally, the shelter calls us DPPs.   Contrary to what some say, that does not stand for Daily Poop Patrollers.  It means Dog Pet Pals.)

We were admonished as trainees to watch out for signs of anything unusual or eye-catching like diarrhea, dark crimson or excessive blackness (that could mean blood in the stool) and foreign objects like bits of plastic, hard rubber toy fragments and nature’s annual bugbear – foxtails.   Discomfort, constipation and pain while pooping should be noted, we were advised.

I remember one instructor saying: “If it looks like pale caramel with a consistency of condensed milk, it may not be so good.”  That kind of put me off one of my favorite candies for a while.  But you have to keep an open mind in the dog business.

Like detectives at a crime scene,  DPPs collect suspicious samples in the plastic bags we all carry and deliver them to the shelter’s animal care technicians who decide if further action is necessary.  Maybe a dietary change is a good idea.  Maybe the dog is excessively stressed.  Maybe a physical exam is called for.  Poop can tell you that sort of thing.   I wonder if it would be a good idea to take a sample to the vet’s office when your dog goes in for a routine check-up – even if it looks healthy and pristine (if I may be allowed to use that description).

Focusing on this side of dog care has had an impact on the way I care for my own dogs.  We used to give our two little guys raw marrow bones from the supermarket.  They loved the bones and jumped up and down with glee when they got them.  One of our dogs hid her bones under cushions in the living room, behind sofas, and even in one of my sneakers on a shoe rack in the hall closet.  Then she would check up on them and relocate if necessary.

Is this normal behavior?

Then we noticed sharp little bone fragments in the poop of one of the dogs.  They were not always easy to see – but they were there.  They were menacingly spiky in appearance and looked as though they could penetrate the linings of stomachs or intestines.   Our dogs never developed such problems – but the debris looked scary and now they don’t get the bones any more to chew into little pieces.  Tough love, I suppose – Sally and Chloe will never understand why their beloved bone supply suddenly dried up.

So what should prime grade poop look like?  The American Kennel Club sets standards not only for breeds, but for their poop too.  It outlines five categories: (1) color (2) shape (3) consistency (4) volume and (5) content and it is all based on common sense.

The color should be chocolate brown – though other colors may come through if mixed into the dog’s diet.  The stool should be shaped like little logs and maintain their shape when they hit the ground.  The consistency should be that of kids’ Play-Doh and the stool should be easy to pick up with your plastic bag.   Volume depends of course on the size of your dog.  A Mastiff will obviously make a much larger  contribution than a Yorkie.  The AKC notes that the volume will increase as more fiber is added to your dog’s diet. 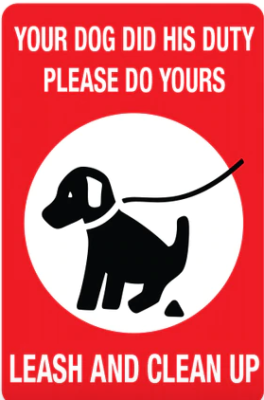 This what the AKC says about the all-important topic of content: “Mucus could be an indication of an inflamed colon while excessive grass in addition to the poop’s fecal contents could be an indication of stress or gastric upset.   If he has a dermatological problem and he’s losing hair or licking a lot, he may have increased hair in his stool.  Small white bits . . . may mean he’s got worms.  So a trip to the veterinarian is in order.”

On the color question, the AKC adds that orange or yellow could be caused by biliary or liver problems, green may be the result of a gall bladder issue – and gray or greasy stool could be related to pancreas or biliary problems.

So that’s it.  Your dog should poop chocolate logs that should be not a pleasure to pick up, but easy to get rid of when you do your neighborly thing.