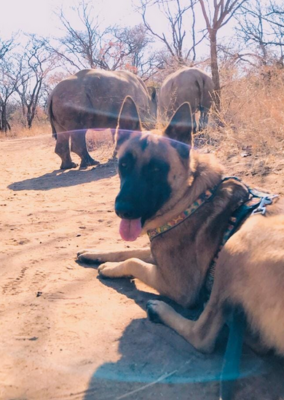 A skilled trainer can teach a dog many things – agility tricks, how to detect drugs and explosives, how to track missing and injured victims when disasters occur.  But kindness and compassion cannot be taught.  Those rare qualities must come from a dog’s heart.  This is a story of a dog with a heart like that.

The dog is a two-year-old Malinois named Hunter who works alongside his brother Duke in the South African wilderness protecting young rhinos from the deadly international trade in rhino horns.  They are from the same litter, they look alike – but they are remarkably different from each other even as they work toward the same goal.

Duke relishes his job of tracking down poachers lurking in the bush. Hunter’s mission is to find panic-stricken rhino calves that are lost and often injured when poachers slaughter their mothers. But then Hunter does something extra that is almost unheard of. He tries to comfort the baby animals in their distress.  He tries to mother them. 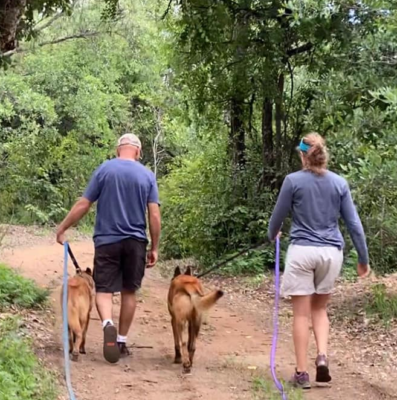 His human handlers witness this in awe.  They have never seen anything like it before. 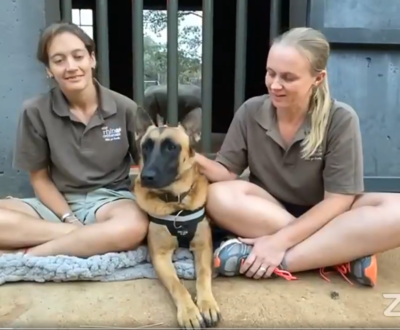 The brothers are based at a rescue operation known as The Rhino Orphanage deep in the bush of South Africa’s vast northern highveld.   While anti-poaching tracker dogs like Duke have been in action for years now  (a famous Malinois named Killer was responsible for the arrests of 115 poachers in the Kruger National Park) nobody involved in rhino protection ever expected to see Hunter’s behavior.  “This dog has brought us to tears,” says a spokesperson at the orphanage, adding that in every other way Hunter is a typical dog, charming everyone with his love of fun and games.

Staff at the orphanage took time off from their duties recently to tell Marin Humane in a Zoom meeting about the brothers and how important they have become.  The Rhino Orphanage is one of several operations in South Africa that care for the calves left behind after their mothers are slaughtered for their horns.  The orphanage raises the youngsters until they can be weaned from human contact and returned to a safe place in the bush. 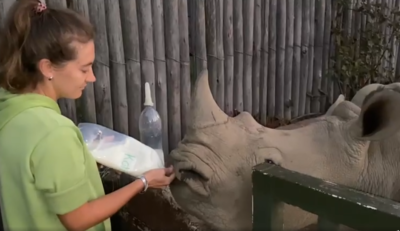 We spoke at a tense time of heightened alert for the orphanage – a night of full moon when poachers, armed with modern high-powered rifles but also with spears and axes, are at their most dangerous.  The moonlit sky is bright enough to make flashlights unnecessary.   This makes the task of rangers that much more difficult and hazardous as they themselves become targets.

The horns the poachers want are as valuable as gold in Asian market places.  Impotent men pay big money for little packages of ground-up horn, believing it will restore their sexual potency.  It won’t.  The myth that it works is widely believed.  Poachers kill the rhinos, hack off the precious horns and leave the carcasses to decay in the bush.  Their money rewards are great but it’s a lethal business.  The poachers are liable to be shot themselves by rangers and a number have been killed by lions and elephants.

The full moon is when Duke is at his busiest, out with his handler on what the orphanage calls fence patrol, ready to apprehend unrecognized humans that he scents and tracks down.  Duke has shown remarkable detection skills, operating with intelligence and concentration at the end of a long leash and special harness.  He and his handler are a team as they search throughout the night. 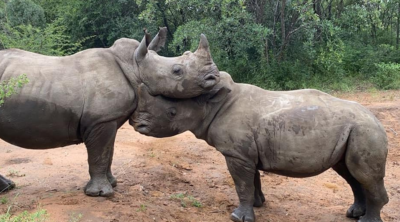 Hunter’s job is not to track poachers but to find young rhino calves that are lost in the thick bush, notably the babies that have been traumatized by the slaughter of their mothers.  Sometimes the youngsters themselves are badly hurt by the poachers or by large predators like lions and hyenas.  If they are to survive, they must be found as soon as possible.  Without maternal care they can become dehydrated quickly, resulting in kidney and other organ damage that can be fatal.

The orphanage tells us about a calf they called Lolli.  She was spotted in a panicked state next to her mother’s carcass, but before rescuers could reach her, Lolli ran off and disappeared.  She was seen days later about 4-1/2 miles away.  Again she ran and two days later she was back at the carcass before running off yet again.  She was found finally about three miles distant, in a bad way and very vulnerable to hungry predators.  In just a few days this terrified baby animal had wandered aimlessly over about 12 miles of difficult terrain.  Her survival was a miracle.

They called her Mofalodi, the local word for “Survivor,” but shortened it to Lolli because it was a mouthful to call Mofalodi for her bottles of milk.  She was very special to everyone and she responded well to the care and affection she received, and the companionship of other calves.  Lolli was later weaned away from human interaction to become the free and untamed rhinoceros she was destined to be.

Hunter has been trained to track down the babies.   But, in astonishing displays of what can only be called compassion, Hunter insists on comforting scared young animals by trying to warm them with his body and staying close so that they won’t be alone in their anxiety.  The young women at the orphanage have been working with rescued calves for years now but they have never before seen such behavior from an animal.  Like medical professionals and workers at animal shelters like Marin Humane’s who often face the bad things life can dish out, the orphanage workers try to avoid getting involved emotionally.

“But,” says Yolande van der Merwe, one of the orphanage veterans and its spokesperson, “we are sometimes in tears when we watch Hunter trying to comfort the babies.  He really loves them.  He cares so deeply.  It is so touching.”  Yolande  and her co-worker Leandi Bezuidenhoud recounted several episodes in which Hunter showed his special affinity with distressed animals.

Yolande recalled that the orphanage first noticed this aspect of Hunter’s personality when a young and very ill domestic cow named Bee was brought in for urgent vet care.   Hunter was still an untrained puppy at the time.  He insisted on licking Bee’s face and lying down beside her.  “He was very taken with Bee and we thought there was possibly something in his memory that attracted him to little Bee,” Yolande said. 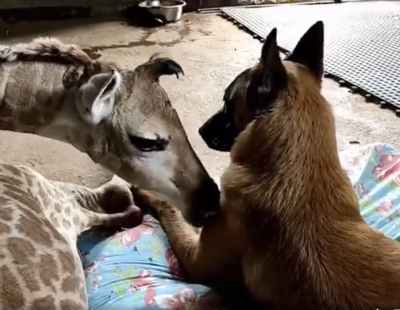 Later this concern became even more intense when a juvenile giraffe was brought in; his survival a touch-and-go matter. They called the youngster Jazz.  Hunter – by now more mature – insisted on caressing and licking the giraffe. He refused to move from Jazz’s side as he was being treated. When a vet approached to inject medication, Hunter growled threateningly and had to be led away gently. Sadly it became clear over the next few days that the giraffe’s condition was beyond help and he had to be euthanized. 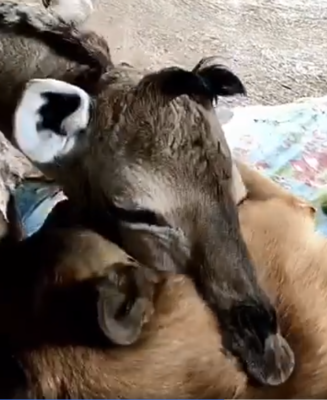 Hunter just knew that the baby’s time had come, Yolande said.  He sat outside the door looking distraught while the vet did what he had to do.  Later, when the giraffe’s body was carried to a van for transport to an autopsy room, Hunter cried and yelped in distress.  It was hard not share his pain, Yolande and Leandi remembered.  The episode was a sad experience for a team of caregivers normally exposed to the joy of healing their young charges. 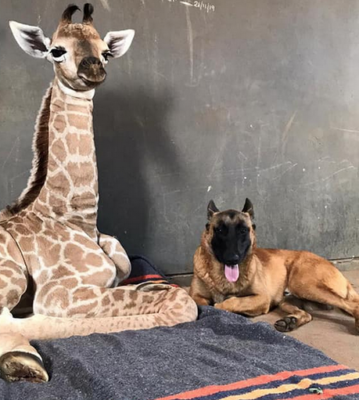 Perhaps Hunter’s most dramatic display of empathy came not long ago when a young male rhino calf arrived severely injured after being alone in wet and bitterly cold conditions.  A big chunk of a rear foot had been torn off by a pack of hyenas, he was extremely cold and in a dangerous state of shock.  The caregivers covered his eyes to help reduce the shock, ran his IV tubes through bags of warm water and covered him with blankets and hot water bottles.

But increasing his body temperature was going too slowly.  The technicians raided a first aid supply and covered the calf in a foil blanket used for treating hypothermia in humans.  They found that the blanket was too short to cover the rhino’s feet that stuck out.  Hunter repeatedly used his nose to try to push the foil over the feet too, anxious to get every part warm and doing it over and over again. He lay next to the stricken calf to lend his own body heat.  “We were gobsmacked when we watched him do this,” Yolande said.  Slowly the little guy began to respond and Hunter stayed with him throughout the worrying time.

They named the sick calf Kolisi after a famous rugby player, operated repeatedly on the foot and fitted him with a series of orthopedic boots that were changed as the foot slowly healed.  Today, Kolisi is a fine adolescent, full of energy and zest – especially when he hangs out with his rhino pals.  They play-fight and wallow in their own pools of thick mud that protect their skin.  Kolisi has a faint limp, but he is a fine young animal, destined to lead a normal and safe life once again. 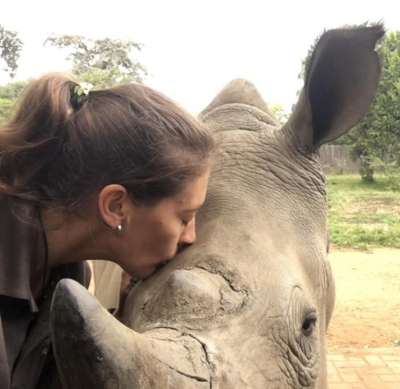 Before we say more about Hunter and Duke, we should note that there are things we cannot disclose.  We cannot tell you exactly where the orphanage is located.  It is a closely guarded secret for security reasons and visitors are not allowed there.  If members of the public want to see the young rhinos being treated and at play, they can watch videos on the orphanage social media sites.  Nor can we disclose how many animals are in its care.  That too is a security matter.  The poachers are relentless and go wherever they think they can find animals to prey on.

Back to Duke and Hunter.  They are members of a hardy Belgian Shepherd variety that are widely used for search-and-rescue, detection and guard duties.  They love to work and be active.  Both brothers have undergone training and their detection skills were judged to be exceptional.  When they are off duty, they love to charge about the orphanage, playing with each other and behaving just like high spirited and happy dogs living in a marvelous place.   The young women volunteers who care for the rhinos have several security systems in place for their own safety and Duke is always alert.  “He makes us feel so safe,” says Yolande.

Duke is not interested in the rhinos and never seeks their company.  His training is aimed strictly at the tracking of human interlopers.  Tracking animals as well would introduce a distraction for him should two different scents appear at the same time.

So Hunter is the rhino guy in the team.  That is his specialty.  If Hunter wants to comfort distressed animals – well, that is his own choice and his human friends at the orphanage continue to marvel at it.  He loves everyone there but his special friend is Leandi and he likes to sleep alongside her.  He is a happy dog and he really likes his job.

Hunter and Duke are living proof that the Belgian Shepherd Malinois is a dog to be reckoned with.