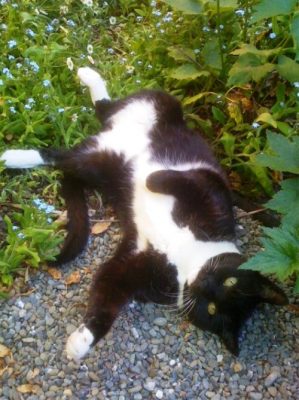 I remember bringing her home from camp, a small black and white seal, sleek and skinny, peering from the space between the suitcases in the back seat. She ventured out to explore the car, stepping gingerly over us, and darting back to her cave when we tried to pick her up. She got braver as the miles rolled by. She eventually tiptoed to me and lay across my lap….on her terms. She looked up at me, and twitched her head every time she saw a bridge go by though the moon roof. We drove through the day to get her home.

She let us pick her up to carry her into the house to introduce her to the two big male residents, stretching her neck to touch noses with them. We put her down and she sashayed toward them, dancing away when they appeared to have any interest in her. She explored the house, always circling back to the boys. She was alternately coy and flirty with them. They were unmoved.

She came back from a date with the vet, shaved and turned inward. She stayed in the big dollhouse on the floor, peering out from the kitchen door, refusing to come out. I finally pulled her out and held her on my chest. She still sulked. I cried because I thought she might think that I had betrayed her trust in me. The vet said she probably had a tight stitch. It took many days for her to once again become the coy flirter.

She spent the next few months evading us, coming up to us and dancing away when we reached to pick her up. We called her the itty bitty skitty kitty. She had, however, become the queen of the house, bossing the two boys around, teasing them, insinuating herself in between them, ignoring them.

She learned to go out the open second story window and get on the roof, and also to get down from the roof. She would go out the window and into the tree to leave the house and return on her own schedule. She would hunt at night, and we would know if she had been successful. If she made no noise when she came in the window she had a mouse in her mouth, and we would just hear the thump of her landing on the floor. If she had had no success she would always say the same purling word as she came in the window….”I’m back.”

She taught us how to play fetch with her; we crumpled a piece of paper and threw it…she would run to it and return the paper to us. She would do this 4 or 5 times until she lost interest in the game. She’d then saunter to the nearest sunlit spot and curl up, as if to say “well, you don’t seem to be able to hold onto anything, so why bother.”

She made a friend, another black and white furry thing. We’d pull into the driveway at night and in the headlights see twin leaping and rolling bodies. Her friend would leave as soon as we got out of the car. Once, as I called her at the open door at night, she trotted up the walk to the house, trailed by her friend a pace or two behind her. I managed at the last minute to close the door between her and her friend, keeping the juvenile skunk outside. She seemed to wonder why we wouldn’t let it in.

When we were out of the house for the day, she would regularly visit the neighbors. We never saw her there, but we heard that she was there when they were planting their gardens, or cleaning out their garages. She was always home when we were there, claiming her spot on the chair as an equal. Whenever we had a party she would thread her way among the guests, choosing the one she wanted to sit on, without regard to whether they wanted to be sat upon. She was never happier than at a party…she’d come a long way from her skittish early days.

She weathered the death of one of the old boys, wandering around for a few days looking curious. When our daughter came and went from high school and college, she repeated her desultory searches when our daughter left, then climbed into her lap whenever she came home. She never seemed to mind that we were gone, as long as we came back. The only time I saw her unhappy was a time when we had come back from a vacation and I was cradling her in my arms. She stared at me for a long minute, then slapped me lightly and clawlessly on my cheek. From that time forward I always told her when we were going and when we’d be back.

She took to sleeping on our bed with the old orange guy, both of them picking up their heads and saying the same “mmrph?” question when I walked into the room. They would both be in bed with us at night, each staking out their particular real estate patch.

When my husband died, she would be next to me where ever I was sitting. She became my solace and comforter, the soft thing I could touch in the hard reality of his death. Much later, she watched me as I carried the old orange cat around as he became weaker and weaker. When he was finally unable to stand, I realized that I had to let him go, that I was mistakenly thinking that I could stop his dying, the same way I thought I could stop my husband from dying.

She waited patiently every evening until I finished whatever I was doing, getting up from her chair every half hour or so and asking “neow?” When I finally did turn out the light and walk up the stairs, she walked beside me. I always said to her “remember, you can see me but I can’t see you.” She never once got under my feet or collided with me.

She, as cats are wont to do, began shrinking and shrieking. I realized that she was nearly completely deaf when I could walk up behind her and startle her. She probably didn’t see well either. The birds ignored her, as she did them. She started having chronic nose drool, which she sneezed out at inopportune times, mostly when she was being social at parties. People started to keep their distance, but not me…she was still my little sleek seal, constant companion, heartbeat next to me, waiting up for me to get home at night.

I finally took her to the vet. He diagnosed a tumor in her lung, and gave her a few days to a few months to live. I gave her amoxicillin, the same antibiotic I gave to my daughter when she had an ear infection. When the vet started her on medication to reduce any swelling and keep her out of pain, she gained back half her body weight. No longer the waif with the ridged backbone, she had the nice round tummy I remembered from her early days. She got happy. She spent her days curled up on the outside sofa, hard at work in her office, as I called it. She did a strange thing, however: whenever I opened the gate to drive in she walked to the center of the driveway and lay down. I could never make her move, no matter how gingerly I drove toward her or revved my engine. She seemed bent on committing suicide. Or totally trusting of me to not harm her.

Then the morning came that I woke without having her pull on my covers and complain that she needed food. I looked for her in all her hiding places in the house and outside, calling her name and banging on her food dish. I went back upstairs and found her lying on my carpet in my bedroom, her back to me. As I gently picked her up, she made her meowling noise, and when I tried to straighten her legs, she let me know she was in pain. Her face and eyes were clear, and her coat was sleek and shiny like a kitten’s. I knew that the time had come. She was calm and not frightened. I wrapped her in a towel and drove her to the vet, cradled in my left arm for the eight blocks to the office. She looked up at me, and at the trees and lights passing by, completely relaxed, curled into me. She knew the vet, and was never frightened there; this time was no different. I held her in my arms as the sedative took effect…I talked to her and rubbed her head, her ears, her eyes. When the vet put the IV into her leg, she made no movement, no sound. She looked at me and I looked at her. The vet listened to her heart and said she was gone, then reminded me that her spirit was in the room. Her spirit was in me too. She knew she was loved, and she trusted me not to hurt her. And when my time comes, I want it to be as calm and peaceful as it was for her.

She is now curled up in the warm and tender ground in one of her favorite places, under a daphne bush, where she will be able to watch the comings and goings of all her friends and family, where I can greet her every time I pull into the driveway. And when I go up the stairs in the dark to go to bed, I still say “remember, even though I can’t see you, you may still be able to see me.” Sometimes, just sometimes, I feel her walking beside me.