Redd is a ridiculously good looking 4 year old 80 lb Rhodesian Ridgeback mix. He’s one of those dogs that gets attention wherever you go- which is tough because he’s actually pretty shy around strangers! Once you get to know him he’s one of the sweetest dogs you’ll meet. His demands for being pet are unmatched and his love for attention is unwavering.

Redd is one of the most interesting dogs you’ll meet as well. When he’s comfortable, he’ll share his big personality and his many facial expressions. He’s selectively smart and pretty well-trained; knowing sit, stay, wait, okay, bed, and more. He’s leash trained, but not great off leash. Day to day he’s easy to manage.

I’ve had the pleasure of taking care of Redd for 3 years now. He was adopted when he was about a year and a half old from the humane society. When I first got him he was a major project to tackle (extremely shy and fearful). He’s come a long way since then, but he’s still got more room to grow. Unfortunately, I’ve realized that I’m no longer the best person to take care of him and take him to that next level. I sincerely want him to be the best dog I know he’s capable of being.

Redd needs a few things from his next owner and it’s very important you’re able to meet these requirements or it will not be successful.

Redd needs:
– A very experienced dog owner who is an expert in dealing with behavioral issues (particularly resource guarding).
– Someone who can spend a good amount of time with him each day.
– A lot of exercise.
– Space to go decompress or be in his own area.
– To be an only dog. He MAY get along well with another dog, but generally he’s not great at sharing.
– To be monitored around others- particularly children. He’s generally nervous around people with high energy and is extra nervous around children. Because of his nervousness and fearfulness, he will lash out if he feels cornered or threatened. He does not like being hugged or kissed by strangers.

Redd has the potential to be one of the best dogs you’ll have but he needs your strong effort to get him there. I care a lot about this dog and I’m committed to making sure he finds the right home. 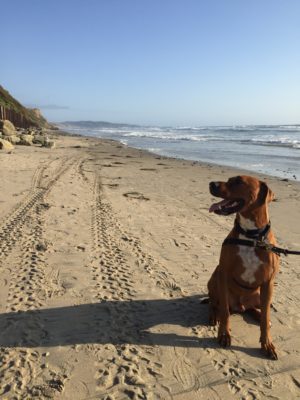