Recently, Dawn and Kim found themselves on separate but equal rants about interacting with the world at large when out and about with our dogs. At the risk of putting out negative vibes we thought some of our readers might have similar experiences and feelings about it all, so without further ado here are a couple rants and hopefully a smattering of humor along the way.

Dawn: One of the most frustrating questions we get in dog training classes is, what  should one do when someone else’s dogs accost yours on a walk. The classic scenario involves a handler whose dogs are on leash when another’s off leash dogs run up to say “hi”. Even if you know nothing about dog behavior, common courtesy dictates that one not allow one’s dog(s) to run up to unknown dogs. (By comparison humans who don’t know each other don’t run up to one another, get right up in each other’s faces and sniff each others’ armpits, for example. But we think it’s great that dogs do that. What’s up with that?) People who understand dogs and their behavior know that the practice is rude, detrimental to both the rushing and the rushed and in some instances downright dangerous.

My point has nothing to do with leash laws, although at the very least leash laws should remind people about their responsibility for the behavior of their animals. I personally don’t care if someone has their dogs off leash as long as they pay attention on their walk and their dogs come when called. The spirit of the law rather than the letter.

I don’t know if it is covid stress or the fact that many first time dog owners acquired dogs over the past two years or if people have always felt entitled to behave however they wish but walking dogs these days is challenging. I have the immense good fortune to have friendly, well socialized and temperamentally robust dogs but there are many dog guardians struggling with behavior problems, recently acquired dogs or even preventing problems.

I have two friends: one with a dog who has been charged by other dogs and now is almost agoraphobic; and another whose dog has been rehabilitating from surgery. The latter can no longer walk her dog in local areas, despite the fact that they walk in “leashed” locations. When she has asked people to call their unleashed dogs they have responded with, “Don’t walk your dogs here if your dog has special needs.” It’s like NextDoor, but in person. 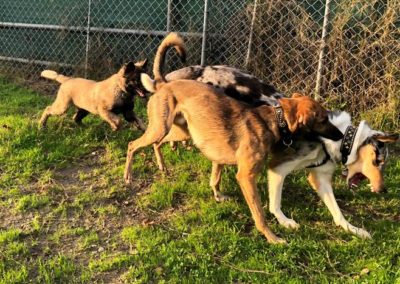 But the guardians of shy or reactive dogs favorite response comes when they ask someone to recall their dog only to receive the response, “Don’t worry! He’s friendly!!”  Allow me to translate: “I actually have no off leash control of my dogs and if you call me on it I am going to get defensive and say terrible things to you.” It’s like FaceBook, but in person.

Despite this being a very tired topic in dog training writing (I write about it all the time, but I sound nicer for the newspaper) permit me to share a recent story.

I have had several interactions with a young man who brought his large, female dutch shepherd to a local park and just let her loose hoping other people with dogs would arrive to provide his dog with someone to play with. I went to the park to train and play frisbee with my three dogs who are not allowed to interact with other people or dogs. Or chase the geese. We were there solely to play with each other. The first time I encountered this young man he approached and asked if his dog could play with mine. I politely declined stating that we were there to play with each other, and in fact, having a strange dog chase another dog who is trying to play ball or frisbee is off putting to the dog being chased. Oddly, he insisted. I demurred. I told him I had no problem with his off leash dog as long as she left us alone. He said he couldn’t control his dog. I offered to move to another part of the park. At that, he left in a huff.

The next time I saw this man in the park he was accompanied by a friend with dogs and for the most part they played nicely together. However, they soon bored with each other and so the entire pack sauntered over and interrupted our play session. The young man and his friend ineffectually tried to recall their dogs. I stopped playing and tried to avoid the onslaught. We had another conversation about my lack of interest in joining their play session and they eventually moved off. Before he left, and I suppose feeling braver being with another person for moral support, the young man told me it was only natural for dogs to play with each other and that I had serious issues. I suggested that the concept of consent be considered and asked him if he personally would crash someone else’s (human) game in the park. I think his friend was embarrassed as she moved off as quickly as she could.

Why doesn’t “No, thank you” mean “No, thank you”? Why am I obligated to provide entertainment and exercise for his dog? Why couldn’t he go to the fenced dog park about 50 feet away where he could have an untrained dog off leash without incident and find someone who actually wanted to play?

The last time I saw the young man at the park I was not feeling emotionally resilient enough for another insistence that my dogs entertain his. Happily I saw a man I regularly see walking his dog and asked him if I could walk around the park with him to avoid being hassled by the young man. Indeed, the young man put his dog on leash and I thanked him when we left. I haven’t been back to that park since.

I understand how difficult it is to provide sufficient exercise for large, active dogs. However, Marin County is chock full of great training institutions like Marin Humane in addition to being the home of numerous skilled independent private trainers. If one wants off-leash skills one actually has to work to acquire them. Or, this young man who appeared to be perfectly able bodied could have jogged with or taken his leashed dog for nice long walks if training his dog was not in the game plan. As is, Not only is he a menace to anyone walking a dog in the park but his dog is actually being trained to harass other dogs! There is a saying, “reinforcement drives behavior” which, in this case, means every time his dog ran up to another dog and interacted with that dog she was being reinforced for the behavior. If and when he decides to try to train her, it will be much more difficult to achieve results. The failure will be blamed on the dog or the professional dog trainer. It is hard for me to watch people sabotage their training relationships with their dogs. 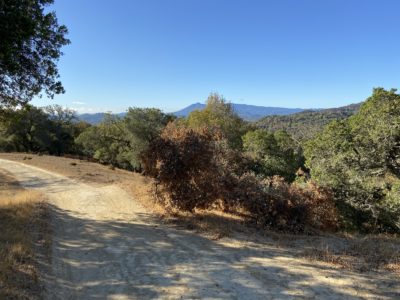 Kim: I hike a fair number of fire roads in Marin County. I have two 12-15 pound dogs of the fluffy variety who, while not blue ribbon winners in obedience trials, have really great recall, sits, waits and leave its – all very useful on a hike. AND skills that make them legit off leash dogs where permitted, which is, oh yeah, fire roads.

I also know how to ride a bike. And I was raised by a southern woman, so my manners are, while not blue ribbon manners, still pretty good. Let’s just say, the French love me. So I know while it’s not a rule, it IS the right the thing to do to announce yourself when biking to the those in front of you, behind whom and upon whom you are careening. More and more I am gobsmacked by the lack of courtesy paid to not just dog walkers, but to regular walkers by careening mountain bikers. Just last weekend, on a local fire road in Novato, I became aware of a biker flying down the hill behind me. He could clearly see me, my friend and our three dogs, but not a word or ringy, ringy from him. Fortunately, age has not yet snatched my aural sense from me. Upon hearing the bike tires on the track I whipped my head around at the last few seconds to see him hurtling towards us. We quickly called our dogs to the side and had them sit as he sped past.

I bet you’re thinking that with such an impressive show of our acknowledgement to his existence, the grateful biker called back a jocular, “Thank you!” But sadly, no. That was not the case. His mother was clearly not raised in the American South. But, ever the polite one, I took a deep breath, pushed my diaphragm to the max and yelled, “You’re welcome!”