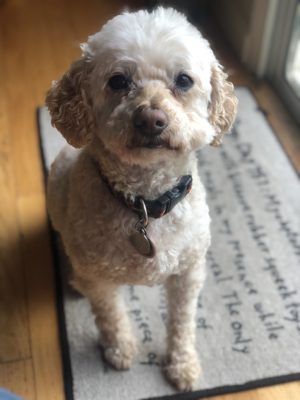 This is Claude. He’s my first poodle in fifty years of dog guardianship and I hope not my last. He’s twelve years old and the smartest dog I’ve ever lived with. And that’s saying something. Claude came to live with us two years ago when his mom, Patty, one of the dearest friends I’ve ever known, moved to assisted living. Patty had early onset Alzheimer’s Disease, so even though pets were welcome in her new home, she could no longer manage the simplest tasks required to care for a dog. The situation broke everyone’s heart, not the least, Claude’s. But Patty and I had been friends for close to thirty years and in all those years we’d shared pet care, pet loss and most important of all, pet plan B. The plan was simple: If something happened to me she would take care of my pets. If something happened to her I’d do the same.

Patty adopted Claude from Marin Humane in 2010. Claude is a mama’s boy and also, pragmatically, a “love the one you’re with” guy. If mama is around no one else exists for Claude. Woe unto the sucker who tries to make friends when mom is nearby. Hearty, scary barking is the order of the day. Claude will not (and I suspect cannot) bite. He has THE BEST bite inhibition of any dog I’ve ever known. Nevertheless, he’ll make you think he’s going to bite you and that’s even better.  So when Patty booked a month long trip to India in 2011 we came up with a plan to acclimate Claude to my house prior to her departure. That’s another behavior adjustment story worthy of a training handout, but the point is, the day came when she left for India and Claude found himself stuck at my house. 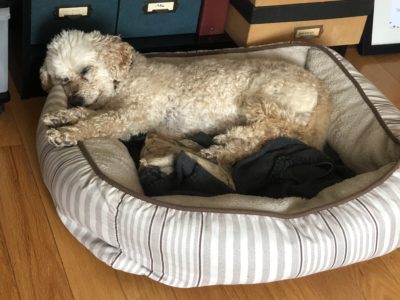 He spent three days on the front hall landing patiently waiting, like Odysseus’ dog, for Patty to come get him. By day four he turned his attention to me and then for the next three weeks he became “my dog.” And so it went whenever she took a trip without him. It’s also fun to note that upon her return he would look at me with the “and you are?” gaze. But the dye was cast and Claude knew that mi casa era su casa.

In 2015 when Patty was diagnosed with early onset I promised her that when the time came Claude would have a safe home with us. Most importantly, she knew that was true. It was a huge weight off her. The saga of knowing when it was time is also fodder for another type of blog, but suffice it to say that knowing the outcome took a huge stress off everyone involved. I think even Claude knew he would be okay.

Every year we see dozens of pets at Marin Humane surrendered when their guardian dies, becomes incapacitated or goes to assisted living or skilled nursing. There was no plan in place for these pets and it is monumentally heartbreaking. And it’s not fair. They count on us to provide for them and even though we don’t like to think about what can go horribly wrong in our lives, surely this last year has shown us the myriad possibilities. It isn’t just the elderly who die or have emergencies.

Two years ago, right before Claude came to live with us, we fostered a spicy Chihuahua mix named Theo. (See my blog post about Spicy dogs.) Theo, despite his high levels of spice, captured the heart of Pet Pal volunteer, Mimi Hampton. With lots of encouragement and support Mimi adopted Theo and now we’re all good friends with play dates and Plan Bs. After Theo’s adoption we doggy-sat him occasionally when Mimi would go out of town, which was part of my promise to her when she adopted Theo knowing he’d be a tough customer for pet sitters and/or boarding kennels. When the pandemic hit last year, Mimi became concerned about Theo’s prospects should anything befall her. An active woman in great health, Mimi is nevertheless a pragmatist. She understands that, despite one’s best efforts, one can be unexpectedly hospitalized or worse. “Unexpectedly” being the operative word there. She asked me if I would care for Theo should she end up in the hospital due to COVID. Of course I said yes.

I am fortunate to have a small cadre of friends who would take in our pets should anything happen to my husband and me at the same time. We’ve designated pet caretakers in our trust. We’re not young, but we’re not old either. We’re at an age where we know we should think about this stuff, but feel like the actual events described in our trust are a long way off. But really, none of that matters since none of us knows moment to moment, day to day what fate has in store.

My advice to people adopting pets, no matter their age, 28 or 82: in addition to choosing a vet, having a training plan and buying fancy beds, toys and food is to also make a contingency plan for your pet’s care in the event you are unable to care for them. Because if you don’t your pet will end up being passed around from neighbors to friends to family members who, despite their love for you, might not be able to adequately care for your beloved pet. At that point, Fluffy will arrive at a shelter where he will be scared, confused, sad and anxious. And after all the love he gave you. This is especially important for older adopters. There is no reason in the world we older folks shouldn’t be thought of as competent adopters, but as the years go by it’s not out of the question that your pet will outlive you, especially cats! (A cat will outlive you just to say, “I told you so.”) Don’t we owe it to our very best friends in the world to provide them with a great life with or without us? 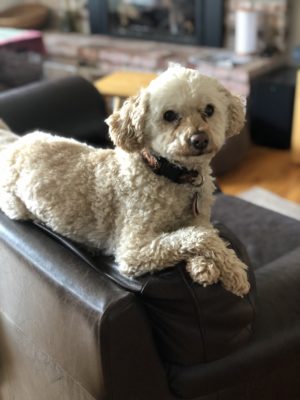 Claude says, “Mom, put that computer away and pet me. You promised.”

View all posts by Kim Bromley →