I have never had a cat of my own – a failure that I lament today.   People say it’s not too late, but it is unrealistic for me to adopt a cat now because my two dogs would never tolerate such a sin.  Cats and birds, especially turkey buzzards, are their unforgivable enemies.  They will stop at nothing short of extinction. So to keep the peace at home, I must enjoy feline company with the cats at our shelter.

But I have had at least some encounters with cats that have made me appreciate just how engaging they can be.  An example:  When my son was living in San Francisco, he found under a shrub in his steeply sloping backyard two tiny, newborn feral kittens – little creatures as exquisite as can be.  He and my daughter-in-law kept a watch on them through the kitchen window but the mother cat never came back. 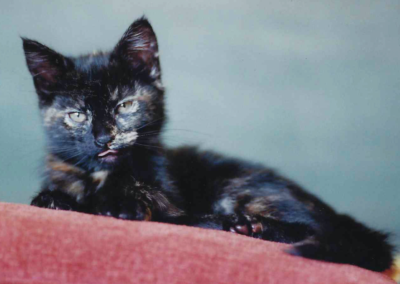 So they decided to keep the sisters, consulted a vet for guidance – and named them Penelope and Georgina after characters in an Enid Blyton story. 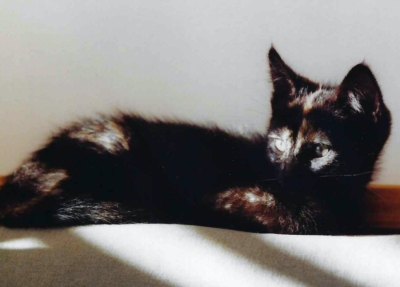 The little foundlings were identical, almost impossible to tell apart.  But as they grew up into much-loved fluff balls and then strikingly handsome full-fledged females, they turned out to be quite different in behavior and temperament.

Georgie was gregarious and affectionate, jumping uninvited on the nearest lap – any lap would do – and purring happily to any stranger who gave her a back massage.  When I sat on a sofa reading, she would drape herself around my neck like a boa.   One of her favorite pastimes was to pad around computer keyboards while they were being used.  She pretended she did not understand “scram.”

Penny was different.  She was not really shy but extremely standoffish with outsiders.  She would allow herself to be petted by immediate family members but by nobody else.  I was a frequent visitor but for the longest time I never qualified as family in her eyes.  She would gaze at me with a look that said:  You back again?  They also started to differ physically as they matured with Georgie slimmer than the rather plump Penny.   Yin and Yang.

On occasions when my son and his family went off on vacations, the cats would go off to a pet hotel in the East Bay.  Part of the routine of packing for a holiday was getting the girls into their carry crates for transport to the pet care.  This happened often down the years.  I got a phone call one day when the family was preparing to leave for the ski slopes of Idaho.   My son said they were running late and they could not find Penny anywhere.  Could I come over after they had left for the airport, find Penny, crate her and run the sisters to the pet care?   Sure!  Glad to help.

Over the years, Georgie and Penny had been allowed to become outdoor cats during daylight hours.  They roamed and controlled the big back yards in a series of Bay Area houses and came home at meal times and at sunset, sometimes bringing mice and lizards as gifts.   On the rare occasions that they caught a rat, they would decline to bring it inside but rather dine on it al fresco.  There was that time the family was horrified during breakfast to hear a crunching noise and discovered Penny on the patio munching on a rat’s skull. 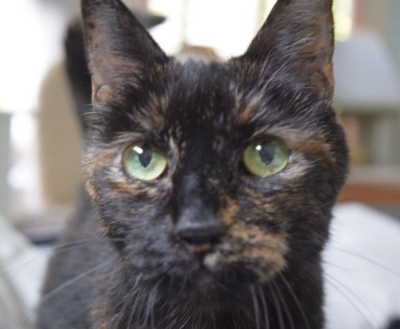 When I got to the house, Georgie was asleep in her crate and all set to go.   Penny was nowhere in sight.   I searched the yard, peered in all of their favorite hiding places both in the house and outdoors – under the shed, behind the chicken coop, alongside the hot water heater in the utilities closet, behind the wood pile in the garage.  I called her name and set out a bowl of her favorite food.  I had the strongest sense that Penny was watching me all this time – she had seldom been separated from her sister.  After nearly two hours, I decided to wait it out and sat down in the house with a magazine.  And suddenly, there was Penny at the kitchen door, glaring at me.

I explained to her that she was going away for a while on her own vacation and needed to be picked up and placed in her favorite crate – but she took off in a flash into the house.  This launched another long and unsuccessful search for Penny who had by now earned the title “that damn cat”.  I phoned a friend to join in the search and as we were about to call it off for the night we finally found Penny under the kitchen stove, as far back as she could get.  I lay on the floor and tried to reach out to the fugitive – and was greeted by slashing claws and hissing fangs that were reminiscent of the Man Eaters of Kumaon, the terror tigers of the British Raj that enthralled schoolboys of my generation.

Unwilling for either of us to get hurt, I checked all doors and windows to prevent escape, repaired to my magazine and chair to play the waiting game again – and promptly fell asleep.

And this is where an astonishing thing happened.  I was awakened by something on my shoulder.  Penny!  She was rubbing her face on my neck in exactly the same way Georgie did.  Cats can be inscrutable whether happy or mad, but Penny actually looked remorseful about her behavior.  I picked her up, held her on my lap and massaged her back.   And for the first time in all the years I had known her, I heard Penny purr.

I thought it would be the smart thing to sneak her into her crate right there and then – but, instead, we sat there for the longest time, Penny and me, establishing an understanding that had not existed before. 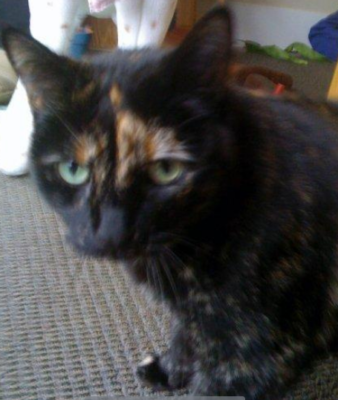 Penny and Georgie have left us now, and we all miss them.  They were fussed-over  members of a family that included Winnie the Doxie mix, Severus the Boa Constrictor, a Guinea Pig and a Hamster.  Sometimes I wonder why Penny changed her mind about coming out of hiding.  Was there a sophisticated thought process taking place?  Did she realize at last that I was not trying to hurt her?  Did she finally recognize me as one of the in-group?

I believe the real reason was that she was afraid and confused about being on her own without her people and sister and that as I dozed on her familiar sofa I represented the nearest possible source of security.   So she chose to come to me.   It was a rational act.

Whatever it was that went through that little head, it was a memorable experience and it was quite moving to be accepted finally by Penny.  We remained sort of pals for the rest of her life – even though she never climbed up on my neck again.  But that was okay.  I didn’t mind because Georgie did it all the time.