Since the beginning of 2022, both Susie Harper and I have had the joy and pleasure of traveling to North Africa, Susie to Morocco and I to Egypt (and Jordan, which is technically part of Eurasia). For this blog we’ve teamed up with our collective photos and our conflicted thoughts about experiencing other animals (we’ll leave the human species for other bloggers) in different cultures.

Susie and I had the first world privilege of traveling with the same well-known tour company to which we allude with the title of our blog. Without making this an unpaid advertisement for them I would like to offer props to an organization that goes out of its way to educate not only its clients (whom they refer to as travelers, rather than tourists) but also the vendors and colleagues with whom they do business in various locales. I will say more about that in a bit.

Starting with the animals with whom we are most familiar in our daily lives, seeing cats and dogs live very different lives in other cultures can be shocking and difficult. Given globalization and the amount of money that flows throughout the region I’m personally loath to refer to the countries we visited as “developing nations” as though they don’t have technology, governments and functioning economies. They do. And those citizens, like many US citizens, suffer from huge disparities between those that have and those that have not. Having domestic house pets in your life requires a certain level of income that few in the rural middle east possess. Feeding one’s family and livestock is difficult enough without adding what they might consider a frivolous “pet” on top of it all. 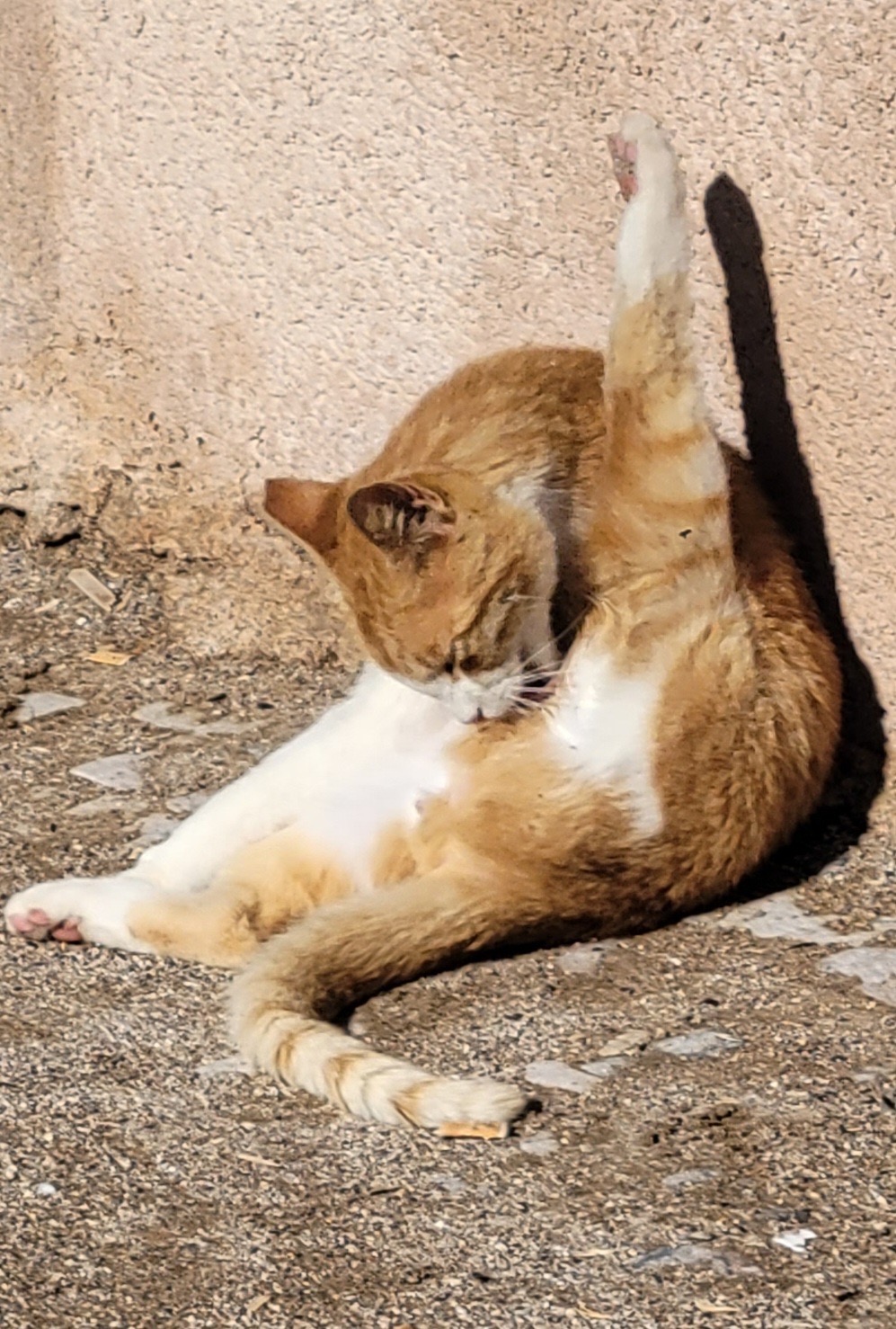 So in most instances, particularly outside of cities, cats and dogs are pervasive and ostensibly homeless. 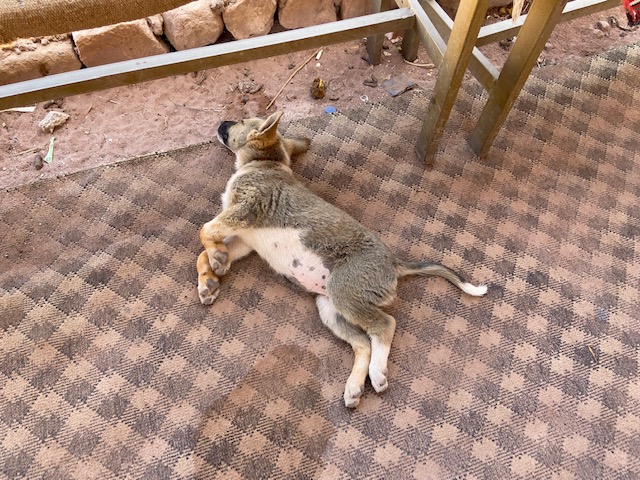 I say ostensibly as they tend to hang around chosen spots where they get the most shade, water and scraps. Cats, of course, are valued for their rodent control capabilities (and presumably this is a source of diet for them) and dogs appear to be tolerated, though no dedicated care is given to them. On one particularly hot day I was concerned about the many dogs we saw lying in the shade of various temple walls and columns. I asked our guide how they could survive with so little water available. 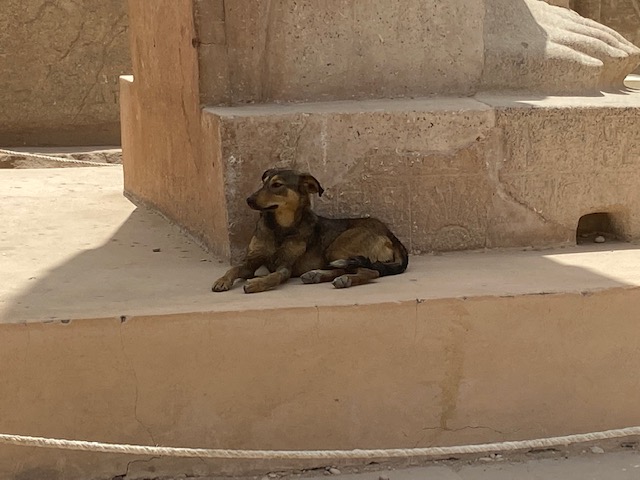 He told me the locals and the temple workers leave them plenty of water. It’s food that is in short supply, but the tourists seem to provide that element. When you’re used to fully vaccinated pets who eat specialized diets, see the vet regularly and receive dental care (mon dieu!) It can be heartbreaking to see an underweight, mangy, flea infested, pregnant cat  begging in a restaurant. (If the cats we encountered were female, they were pregnant or nursing.) There is no such thing as spaying and neutering.

And for all of that, Susie has a great take on the experience. Here is what she told me:

I have this theory that if you can easily see cats in foreign countries they probably aren’t treated too badly, because if they were you wouldn’t see them. Cats are pretty good hiders. I was told that Islam teaches kindness to animals. I did see some people feeding them, sometimes cat food but much more often scraps. 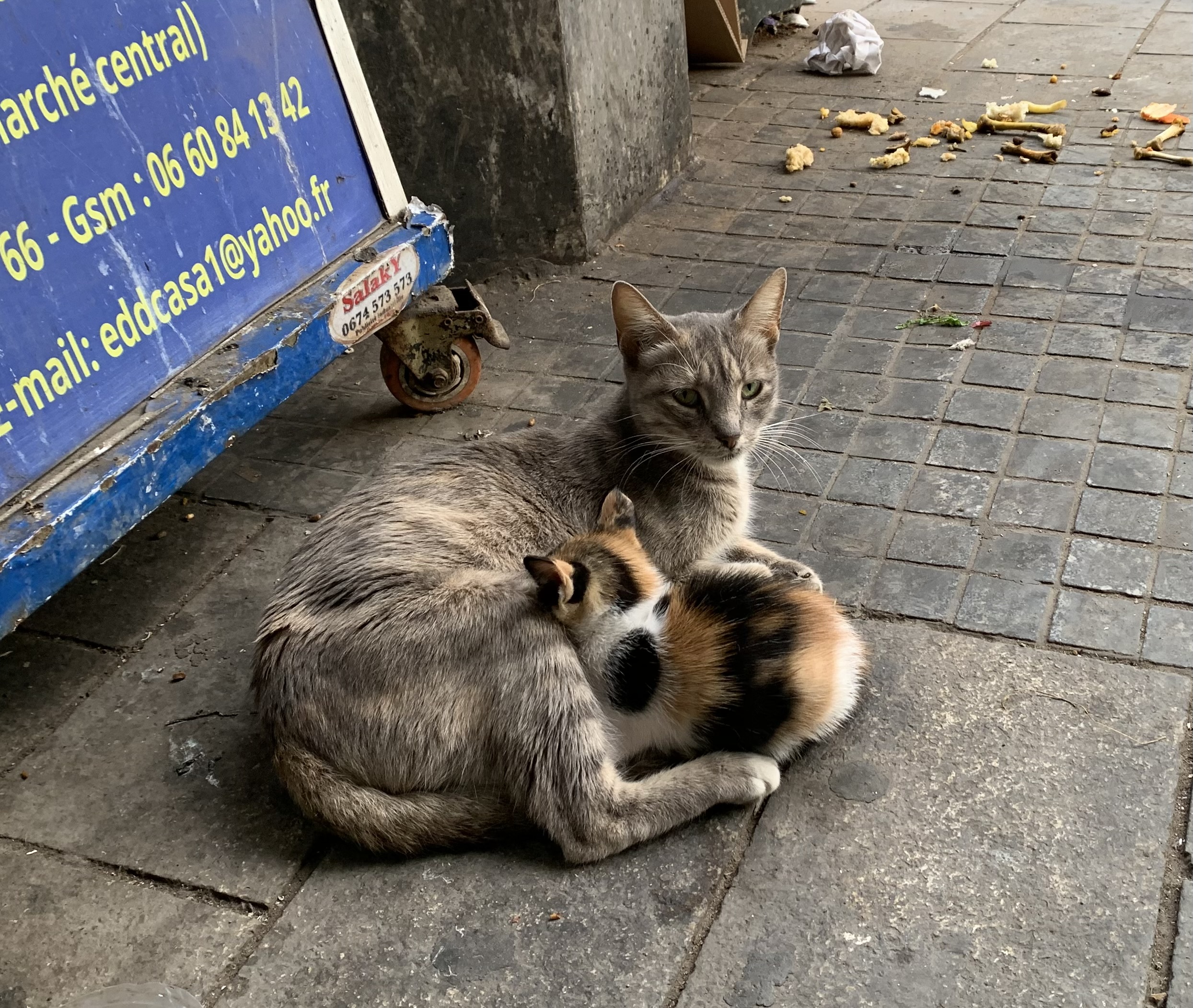 There were a lot of pregnant young cats in Morocco, but not a lot of old cats. We did see some injured cats. I don’t think anybody was taking care of them. There’s a sort of live and let live approach to everything. From what I understand they don’t really want their cats or dogs spayed or neutered for the same reason. Let them live their lives, be natural, etc. On one very busy street in Casablanca we saw an older kitten nursing her mother. My guess is that the other kittens in the litter did not make it. 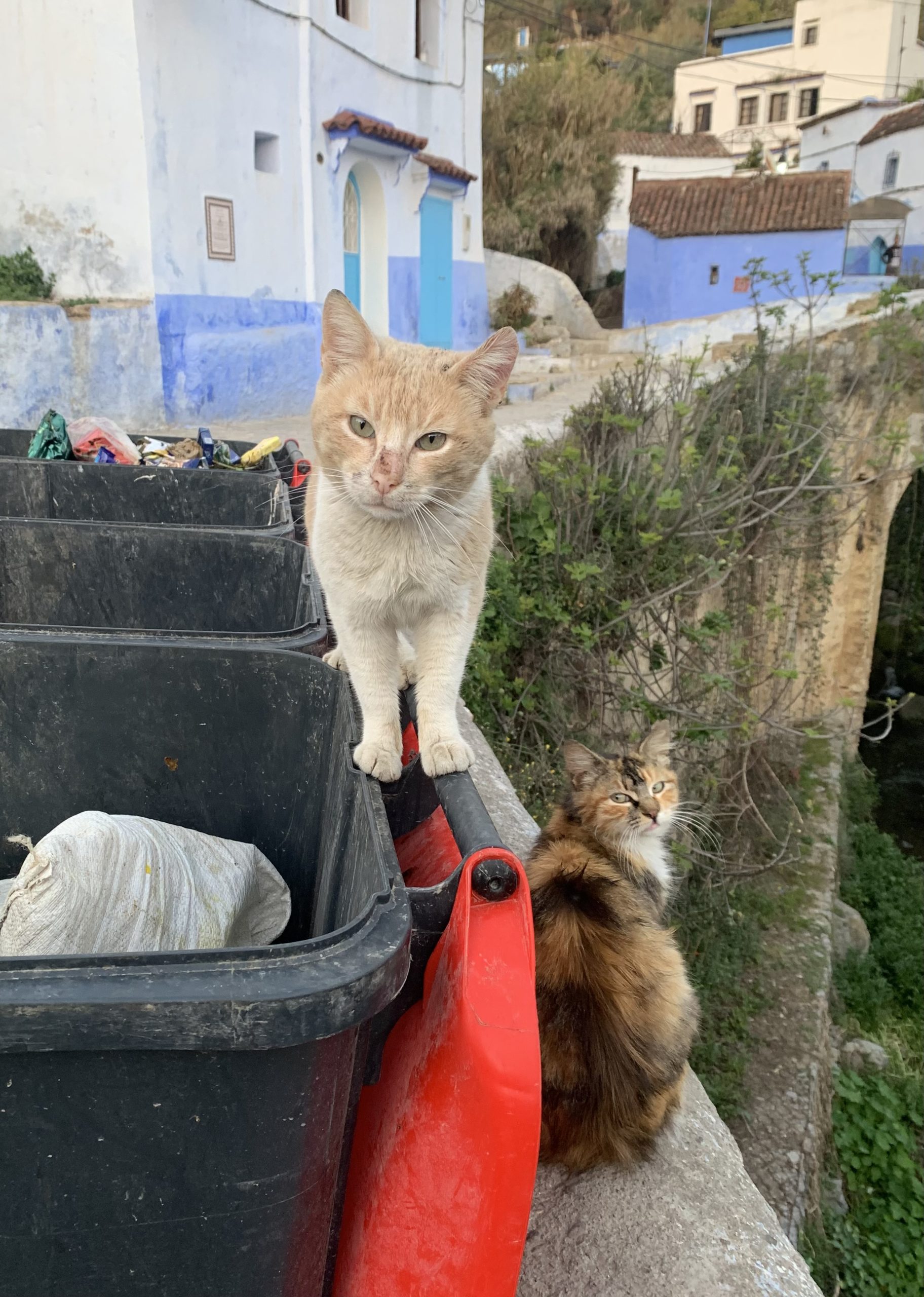 On the other hand, we passed by a butcher store in the Medina, and they had put a box next to the (covered) meat case, at waist height. A mom cat was there with her kittens, so someone obviously cared for them or was at least watching out for them. So I think overall people were kind to them but didn’t necessarily take good care of them, at least by our standards. Keep in mind my animals sleep with me in my bed…

Prior to arriving in Egypt the group I traveled with went to Jordan, which is a beautiful country and one of the most progressive with regard to social policies in the middle east. In Amman we had the pleasure of dining with a family one evening and we all enjoyed their dog, Sheila, an absolutely lovely Tibetan Terrier whose default “sit” was the best I’d ever seen! Sheila is the exception in Middle Eastern countries as opposed to the rule, but it appears that more and more middle class families, particularly in cities and adjacent suburbs are adopting pets and including them in family life much as those in western cultures do. One little girl told me she wanted to be a veterinarian and we passed several upscale pet supply stores. When I travel I keep a journal and part of that involves noting the animals I meet along the way. Every day ends with the Animal of the Day. Sheila was one of the most notable AotD.

Other animals of the day included a parrot, two turtles, falcons, camels, horses, cows, water buffalo, goats and sheep. The latter are often spotted with herding dogs, so we felt sure those dogs were fed and housed and received at least a modicum of veterinary care, if for no other reason than to protect the financial investment of the flock. The tour company in question let us know that they make every effort to work with the vendors who provide camel and horse drawn carriage rides in an effort to offer us a more humane experience. They asked us to please report any abuse we might see. But by and large they look for handlers that offer positive reinforcement and they educate on the ills of mistreatment. Susie’s trip leader told her that the horses suffered malnutrition during the pandemic because there were no tourists/travelers/visitors and so the buggy owners could not afford to feed their horses. Everyone is grateful for the return of travelers for obvious economic reasons. This seems like a clear example of how our travels can benefit not only the people in other countries who make a living from tourism, but how the animals benefit as well. 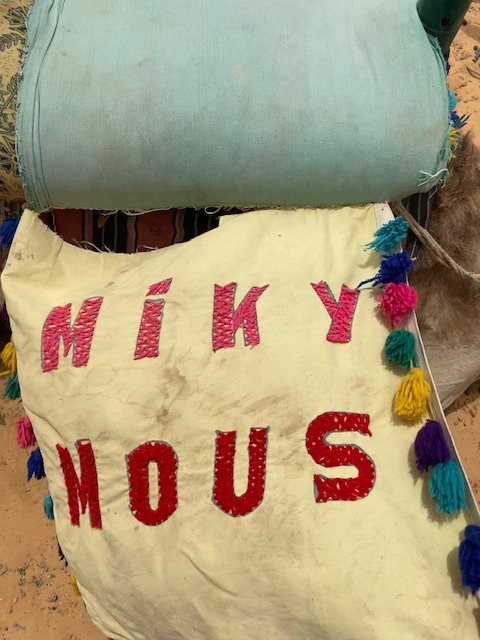 One thing I learned about camels: they have long memories and dole out retribution. A mishandled camel will turn on his handler. Camels are bigger and have awesome teeth, so those in the camel business generally treat their camels with kindness. Our camel ride was a transcendent experience for me and I very much appreciated being given the reins. My camel, hilariously named Miky Mouse, was clearly a mellow guy. He responded to my long dormant horseback riding skills as though we’d ridden together often. He made me feel like I knew what I was doing and so of course I love him.

Our afternoon at the camel market was an entirely different affair and I must admit did not thrill me. We were on the tail end of the market and the camels left for auction were most likely going to be sold for meat. The camels at the market we visited came from Sudan where they are bred for riding, working and meat. At the auction markets they are hobbled so that they won’t run away. While it wasn’t evidently painful for the camels to have one leg tied, it most surely was an annoyance.

I’m so often reminded of Star Trek when I travel: observe but don’t interfere. Inherent in this philosophy is the notion of judgement. It would be so easy to judge, to want to effect change, to “make things better.” It’s one thing if I point out to someone in my neighborhood that their unhappy dog barks all day while they are at work and to possibly offer some solutions. But it’s an entirely different thing altogether to travel to other places with unique cultures and presume to preach about “better ways.” 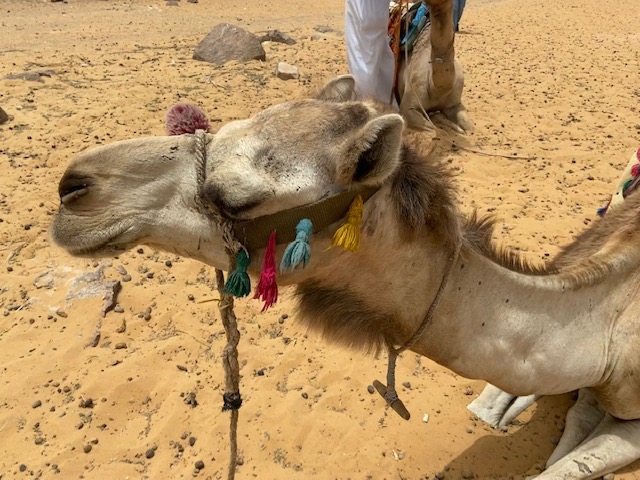 If I’m not mistaken that’s the very definition of colonial, and while I wish camels weren’t hobbled anywhere in the world, I also know that if I’m to practice “better ways” I need to observe and not interfere. But it’s hard. Still, I am grateful to be able to travel and have vastly different experiences than I have at home. I come away much richer and I hope that Miky Mous got something out of it too. I told him he’s a good boy.