Things don’t always work out the way you think they should – a situation that happens quite a lot when it involves dogs and cats.  It’s a lesson I and some friends have learned with a bit of pain followed by a few embarrassed giggles.

My own lesson came when I was working in the garage of my son’s terraced house in Bernal Heights, San Francisco.  The garage opened out to one of those steep streets they have there.  As a newly-retired guy, everybody told me I had much too much time on my hands.  So my job was to construct wooden bookcases for my son’s den.  I set up my power tools and benches in the garage and banished his car to the street outside, hoping it wouldn’t roll away down that precipitous slope.

in his backyard, Penny and Georgie, identical little black-and-tan torbies. They had the run of the house and were in the habit of turning up anywhere – on top of kitchen cabinets, snoozing on the TV set, under the living room couch, behind bedroom cushions.  Once or twice on my head when I was sitting down reading a magazin

With everyone away at work during the day and nobody to keep an eye on the sisters as they wandered about the house, my son instructed me to shut the door from the entrance hall to the garage so that they would not escape to the great Bay Area outdoors and meet a certain doom on the busy street.  I did exactly that and posted signs on both sides of the door saying: “Don’t open this door.” I rejected the idea of using a strong but socially dubious adjective between the words “this” and “door”.

I set about measuring, cutting and sanding – making a lot of noise.   Neighbors popped in regularly through the open garage door to chat and advise that they wouldn’t mind it I came over to build stuff for them too.  One guy offered to swap choice wine for a bookcase. Three bottles of the kind of wine you won’t find at CVS, he explained.

I informed them that the door connecting the garage to the house was shut securely to keep the cats inside and safe.  “Then how,” asked one of my visitors one day, “did that one get onto the sidewalk?”

Oh My God!  Standing right there staring at us from the sidewalk was either Penny or Georgie.  I couldn’t tell which.   “Get over here you little sod,” I yelled, dropping my orbital sander and running out to catch her.  PennyGeorge took off up the street with the neighbor and me in hot pursuit.  I mean really hot.  If you have ever run up a steep San Francisco sidewalk on a hot afternoon you will know how that can be.

Some of the houses higher up had their garage doors open too and we looked into them urgently but saw no animals of any description.  Then the neighbor who was younger and fitter than me – and had run faster and further – called out that there was a cat lurking under a car in a garage right at the top of the street.  “I’m not going in,” he said,  “I don’t know these people.  Somebody will think I’m trying to steal their car.”

So I went in alone to be met by a woman with a raised broomstick who demanded to know why I was crawling around her garage.  “Well I apologize if I scared you but I am trying to get my cat,” I explained.  She looked suspicious and mad and I hoped she wouldn’t call the police.

But before she could do that I managed to my astonishment to grab PennyGeorge by the scruff of her neck like mama cats carry their kittens.  I held on to a spitting, clawing, hissing, enraged mini-tiger that really, really did not want to be held on to.  As I struggled to carry this twisting beast who wished me dead down to my son’s house, I was surprised to see that her normally shiny calico coat was in poor shape – dirty, dusty, lumpy and tired.  And her teeth were yellow.  Poor girl – she has had a rough afternoon, I thought.   Needs a bath.

I got into the house with the fugitive, hoping that the other one had not escaped too – and there, lying on the living room sofa, were the two sisters.  They looked up with interest at me and at the reluctant visitor I carried. 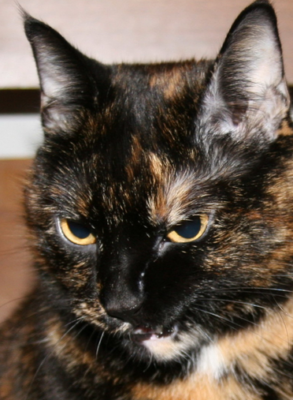 I now had three identical black-and-tan torbies – two of them young, sleek and innocent and the third grubby, streetwise and thoroughly annoyed.  Penny and Georgie had been ferals, no bigger than hamsters, when they were found under a shrub in the backyard.  I had reunited them with their mom.

I tried to placate the old lady and set out a dish of milk for her as she hissed in a corner but she rejected it with contempt and she dashed off without a farewell to her offspring when I took her to the back door.  To her, the kittens were ancient history, an adventure from the past.  Or she was just a lousy mother. We never saw her again.  Penny and Georgie went back to being orphans.

Which brings me to another episode that happened to a good friend just a few days ago.   She did not want me to mention her name and that is understandable.   My friend was carrying out her regular Saturday morning chore – delivering food parcels from a charity to needy folks in San Francisco.  Every weekend, she and her husband drive around the city getting directions on their iphone and everyone is glad to see them and the boxes in the trunk.

When they turned on to Lombard Street after coming down from the Golden Gate bridge, they saw a woman at a gas station who suddenly stopped pumping gas into her car to chase after a little dog that ran into the street.  Oh no! – the dog must have jumped out of her car.  It was in danger of being killed on one of the city’s busiest streets.  The woman stopped, hesitated, gave up the chase and went back to take care of her car.  My friend turned to her husband and said damn we must catch that dog right now.  It’s gonna die. They found an iffy parking spot, jumped out and ran after the dog – which, by some miracle brought on by urgency, she was able to grab.

The little dog, a slender Terrier, was not happy about this.  He twisted around and bit my friend on her hand.  At the same time, a man standing on the sidewalk and clearly a vagabondish sort of fellow, began to upbraid my friend about chasing his dog and many other sins that he accused her of.  It was certainly his dog.  After his snarling and his pet’s bite they strolled off together, leaving my friend with a painful hand that she had to take to the ER for a tetanus shot.   The woman who had refueled her car drove off without a word.

Those are true stories but my favorite story in this vein may or may not be true.  I have not been able to confirm it – but it was told to me by a reputable source who swore it happened.  It involves a couple from the Bay Area who went on a fishing trip to a wild and isolated part of the Mexican west coast.

One night, they heard sniffing and scratching outside their tent.  It turned out to be a friendly tail-wagging dog that was thin and extremely hungry.  They gave him a meal from their rations, set out a water bowl, and he devoured it all with gusto.  Then he lay down and fell asleep.  They carried on with their fishing vacation for a week and the dog hung around, eating with them and sleeping next to the tent.

When the time came to go home, they had become so attached to their stray friend that they decided to try to smuggle him through the border post and take him home to America – which they succeeded in doing.  And so the formerly lonely and hungry dog became their fatter and pampered pet.

One day, they took him to a vet for check up.   The vet – who knew dogs – told them: “Haven’t seen one of these guys up here before.  You know what you have here don’t you?  It’s a Mexican wolf.”

If any readers can confirm this story, I’d love to hear from you.  It deserves to be true and it is true until further notice.