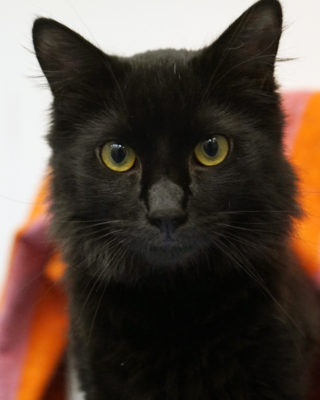 Mario was a long shot. He had already been returned from another rescue that thought he needed too much work to be adopted. But what Mario needed was more time and a whole lot of combined effort from the behavior staff, Feline Intervention Team (FIT) volunteers and the Animal Care staff.

When Mario first arrived on April 30, 2021, we learned he had lived almost exclusively in a cage since being trapped as a kitten. His siblings had socialized well and had all been adopted. But Mario’s forever-home journey was going to take a lot longer than the journeys of his littermates. Mario spent over three months in foster homes and a week at the rescue organization that neutered and vaccinated him, but was returned to the original trapper as un-adoptable. When Mario came to Marin, he was an older kitty of five months, scared, shutdown and hissy.

We gave Mario a room in the Adoption Dogs A section, as that had become a cat housing unit during shelter-in-place. We started our visits and behavior modification. The first five days at the shelter Mario wouldn’t take treats or play. He kept his back to all visitors and if he did turn around to look at us he gave us a big unhappy hiss. On Day six using Drama Trauma (an herbal calming remedy), talking to him, offering treats and trying to entice him to play with his Gecko wand toy, we saw the first change in him. Mario was still mostly in his cubby, was still hissy, but he no longer kept his back to us and his eyes became relaxed a bit. He blinked at us for the first time.  On this day after about 10 minutes of encouragement, Mario left his cubby and played briefly; then back into the cubby for more play. Slow progress but a beginning!

The next few days followed a familiar pattern. Mario would hiss big and loud at first, exchange blinks with us, play with his Gecko wand toy from within his cubby, jump out and play some and then head back into his cubby for more play.

The following week there was a little more progress. Mario alternated between a hiss and a meow greeting from inside his cubby. Always though, when he saw his Gecko toy, he became a different guy—bouncy and fun and ready for a round of play.

We saw even more progress at the start of the third week. Mario was out of the cubby and at the glass door looking for breakfast. We removed his glass blocker halfway so he could see the hallway—he liked having a view of the people coming his way. We offered Temptation treats to entice Mario out of his cubby for petting instead of just wild romps of playtime. He started with body rubs and head butts progressing to petting and purring.  We removed his glass blocker completely for full view of the hallway. 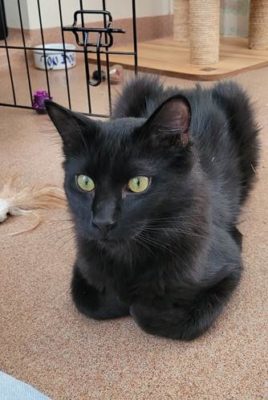 Mario was still skittish with fast movements, did not like to be approached and would not allow himself to be picked up, or even have a collar placed, so we were always aware of letting Mario make all the first moves.  When we interacted with Mario, allowing him to lead the way he was an endearing, active and purry guy. We made Mario available for adoption on May 19th with a pre-adopt consult requirement, but because of his dismal handling skills we worried about  getting him into a carrier for adoption.  So we started training him to a wire dog crate. At first he was hissy about the whole idea of a crate in his room, but enlisting the help of the Animal Care staff, we started feeding all of his wet food in front of the crate and slowly moved the food into the back of the crate. We also tossed treats inside every time we visited and we covered it with a heavy blanket for perching on top.  The next few weeks we saw more progress with Mario. The FIT volunteers all commented on the major changes in him. He no longer hissed! He engaged immediately, rubbing all over them, purring and playing. While sitting on the floor Mario began to put one or two feet on a lap, then his whole body. He climbed in and out of laps and in and out of the dog crate for treats and toys! 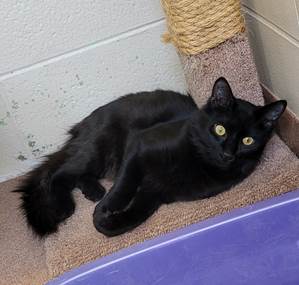 In June, we decided that Mario could handle a new challenge line and needed more enrichment so we moved him to a larger cat room when it became available. His crate training made the move easy for us and less traumatic for Mario. No picking him up and no forcing him into a crate. Just toss a treat and shut the door! We had helped Mario successfully acclimate to the small room in adoption dogs and felt he would also be successful in the larger cat room, too.  It only took a day for Mario to feel comfortable in his new room. He was rather suspicious about the dog crate now but we kept it in the room for him to use as a perch. We began the same training method with a smaller cat carrier as we had with the dog crate in anticipation of sending him home in a cat crate. We also had more room to maneuver in the cat room, so we added a chair in order to work with Mario on our laps. We knew that working with him in the chair would get us closer to being able to pick him up. It started gradually with Mario placing his front legs on the handler’s lap and the handler being able to “help” him up.  Gingerly, we guided him up to our laps, offering Temptation treats while handling him.  With this gradual approach paired with positive reinforcement (treats) Mario  allowed us to lift him to our laps from the floor with no issues. Once on the lap, he enjoyed lots of petting and he even rolled around for more pets! 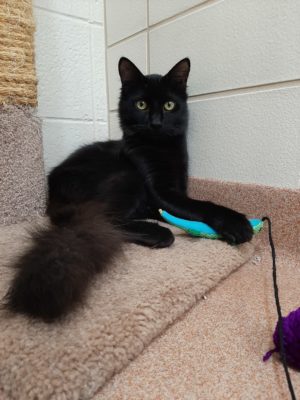 After only a day or two of adjustment in his new room, Mario opened up to a new favorite toy—the Cat Catcher mouse. Having the whole room to move about and chase the mouse, Mario was so excited to play he started asking for more attention at the front of his room. He also took a lot of interest in the “boy next door.” He was delighted to have someone to play with, even if only through the glass. He used all kinds of postures to attract the other cat’s attention. In his new room, we were able to help Mario reach his maximum adoption potential!

On July 6th, Mario was adopted. He tolerated being picked up and placed in his cat carrier. Three and a half months after being trapped, rescued, fostered, rejected by an animal  adoption agency and returned to the trapper as un-adoptable, and over two months of successful behavior modification at Marin Humane, Mario was finally going to his forever home!