A ten-week-old puppy brings a lot of joy but is also a lot of work. I bought a crate, a mat, an exercise pen and a tarp to cover the carpeted floor, a leash, food, a small bowl, and some puppy toys.  The first two weeks I slept on the living room couch where he could see me from his crate, and I could see if he needed to go out.  Both the back stairs and the front stairs were too steep for him, and he was getting too heavy for me to carry. Eventually, Mike constructed a ramp off the side of the deck and fenced in a small area of the back yard around it.  But we still had to get to the car up on the street level.  Determined to go to puppy class and take neighborhood walks, we forged a path through the back yards of neighbors’ houses to one that had a fairly flat path up to the street. Outings with puppy Sequoia were always an adventure.  As was puppy class. The Humane Society of Truckee-Tahoe did not separate big dogs from little dogs into two classes; the dogs in our class were mostly small dogs.  Sequoia was the biggest dog in the class, a linebacker barreling into both people and dogs. They nicknamed him “Tank.”

We soon began hiking the trails in both Tahoe and Marin.  Sequoia loved being off leash and was an enthusiastic hiker.  But he was a handful.

in August of 2018 we went on a road trip from Tahoe to Idaho to see Vicki and Don’s new house, work on some training with Vicki, and let Sequoia play with her new puppy. It was a fun and productive week.

However, in the fall of 2018 he developed a limp that got progressively worse, and the diagnosis was bi-lateral elbow dysplasia. We were in for a six month ordeal.  Although neither of his parents had it, it is genetic and can still occur in their offspring.  It is a painful condition that causes the elbow to develop abnormally while a puppy is growing. In Sequoia’s case, two of the bones in the elbow joint did not fit properly together.  In order to correct it, the surgeon shortened one of the bones to prevent it from rubbing against the other.  Sequoia had his first surgery in December 2018 and his second surgery in March 2019.  Each was followed by a lengthy recovery and required him to be in splint.  He was a trooper and never complained.  Fortunately he had a full recovery. I have two photos of him running joyfully through the Marin hills and at Stinson Beach.

I eventually hope to train Sequoia to be a therapy dog like his cousin Shasta, so we enrolled in dog training classes at Marin Humane.  We completed Family Dog 1 and Family Dog 2 before we were cut short by the pandemic.

In February 2020, just before everything shut down, we embarked on our first road trip with my friend Sandra and her dog, Spike. We drove down the coast to San Simeon and stayed in a hotel right on the beach.

2020 was a difficult year.  At one point all the parking lots to the parks and trails were closed, so I had to find a place to park on a side street and walk in. Our walks were our only outings, and I was thankful for my faithful companion.  We spent the summer once again in Tahoe, away from the constant reminders of the pandemic. A slice of heaven. Sequoia played with his next door buddy, Luke, we tried out some new trails and we flew with some dear friends in their small plane to Oregon and back.  Sequoia liked looking out the window and was a good traveler.  He is the only one of my dogs to have been on trips. 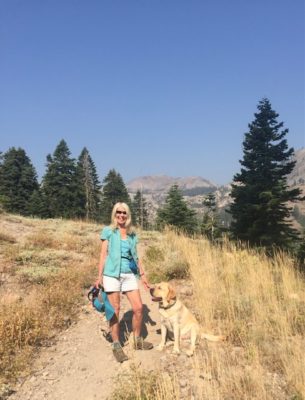 Now are back in Marin.  The county has started to open up and we have completed Family Dog Three, Four, and Five with Dawn Kovell, Director of Behavior and Training at Marin Humane.  Sequoia is thriving, I have been vaccinated, and we look forward to many more adventures together.

This Memoir is dedicated to Vicki, my dear friend and dog trainer, without whom none of this would have been possible.