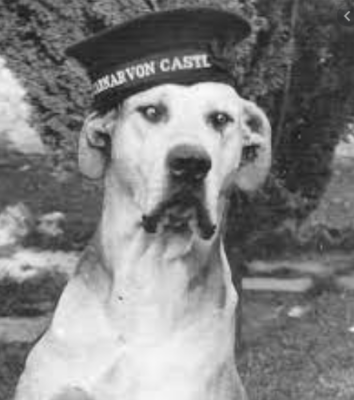 I first heard of Just Nuisance during World War II  when my dad told me and my brother about a dog that was famous for taking care of sailors traveling between their naval base and our city – Cape Town.   My dad explained that he might be the biggest dog in the world  and that he lived in a secret place.  The secret place turned out to be Simonstown, the heavily guarded British naval base about 25 miles from where we lived.

So this is the true story of a dog who made people smile at a time when smiles were really needed, who became a wartime hero in a manner of speaking, who won international fame and whose memory is still celebrated annually eight decades after his death on April 1, 1944.

Just Nuisance was a Great Dane, a particularly tall one even for his breed.  When he stood 6ft. 7in. on his hind legs and put his front paws on your shoulders he could gaze down on the top of your head.  But his special achievement was that he was the only dog ever officially enlisted in the mighty British Royal Navy.

Stories about many canine pets can be found in the annals of that old and venerable fighting force, but Just Nuisance was no mere mascot or obscure pet – he was in fact Ordinary Seaman Nuisance, J. who was later promoted a notch to Able Seaman for good behavior and for time of service.  His recruitment papers made it official.   His promotion entitled him to some perks. You can check him out at the Imperial War Museum in London. 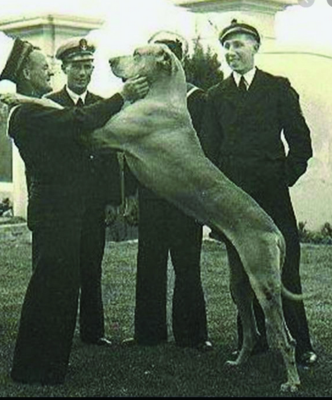 What is more, his service took place at a time of global war in the 1940s when the Royal Navy was engaged in deadly conflict with the navies of Germany, Japan and Italy.  Seaman Nuisance played his part but never actually went to sea with his shipmates; he was engaged in escort duties ashore.  He traveled not in ships, but on trains.  My blog today is about how it all came about.

The German Navy was very active in the South Atlantic at that time, attacking Allied ships with U-boats and laying mines on the critically important sea route around the Cape of Good Hope.   We all had to put up black-out curtains at night so that the enemy, as my dad explained further, could not see what we were having for dinner through their binoculars.  The Royal Navy rushed warships to the region and Simonstown became their most important base in the South Atlantic.

Cape Town soon hosted large numbers of young sailors and, when they were not on active duty, the lads needed places where they could hang out and get snacks and drinks.  Just Nuisance belonged to a man who ran such an establishment in Simonstown and he quickly became a favorite of the boys in bell bottom trousers and suits of navy blue.  He loved all the petting – and he was even fonder of the treats they gave him and the walks they took him on.

He began to follow the sailors back to their ships.  Sometimes he found a cozy spot on deck but when he was turned away, he simply plopped down at the top of the gangplank and waited for his pals to turn up. Because of his huge size he filled up much of the gangway.

That’s how he got his name.  Some sailors found it hard to step over such a big sleeping dog to go aboard their ship – especially when they had downed a beer or two – and so they called him Nuisance.  The name stuck.  The “Just” part came later.

When they had shore leave, the sailors liked to take a commuter train into the big city where young red-blooded men always find things to do.  As one of the world’s busiest seaports, Cape Town had plenty of the kind of entertainment they sought.  Nuisance would follow them to the station and eventually he began to board the trains too.  If there were no sailors around he would board a train anyway, sitting next to non-navy passengers. When uniformed servicemen got on board further down the line, Nuisance would abandon the civilians and join his delighted shipmates.  On arrival in Cape Town, he boarded a train going home with lads returning to duty.

Newspapers picked up the story of the commuting Great Dane and Nuisance was the talk of the town, something to be cheerful about with the war news not always very encouraging.  Dads told their kids about big Nuisance at bedtime.

Officials of the South African Railways and Harbors administration have never been renowned for a sense of fun – and in that spirit, or absence of it, they took a dim view of this dog riding on their trains without a ticket.  Conductors were instructed to ignore the protests of the sailors and to put him off at the next available station.  Which they did.  This was no problem for Nuisance.  He waited until another train came along and boarded that one.  He was even known to hike alongside the rails to the next station and climb aboard there.

This was too much for the railway people.  They warned Nuisance’s owner that his dog might have to be seized and euthanized unless he kept it under control.  When officers of His Majesty’s Navy heard about this threat they were appalled.  They realized that Nuisance was great for the morale of their boys – and so they went into action.

They pointed out to the railway authorities that navy servicemen, on duty at a time of war, were entitled to ride free of charge.  Therefore the Great Dane known as Nuisance would be enlisted into the Royal Navy with the entry rank of Ordinary Seaman and would be entitled to accompany his shipmates to Cape Town without a ticket.  Fine, the railways replied, but he must have official papers to show the conductor. 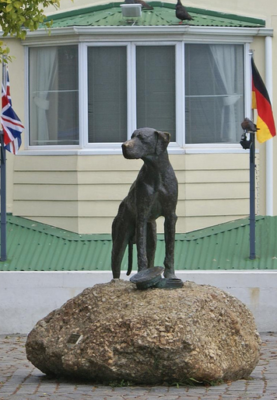 One of Ordinary Seaman Nuisance’s shipmates helped fill out the official form.  With bureaucratic precision, the clerk wrote down his name Nuisance and then asked what the dog’s first name was.  The answer: “Well it is just Nuisance.”    So “Just” was entered as the first name and that is how he is remembered today.

Just Nuisance became a legend and was regarded with great affection by serving navy men all over the world who had spent time in the South Atlantic – sailors from Allied navies as well as the British.  He was the only dog ever to achieve the honor of  officially joining the Senior Service, as the Brits refer to their navy.   On the many occasions that he posed for publicity and souvenir photographs he wore one of those little sailor caps just like the ones his shipmates wore.

Inevitably, someone came up with a way to use Just Nuisance’s fame to raise money for the war effort and a “marriage” was arranged with a pretty young Great Dane named Adinda, a liaison that produced two pups, Victor and Wilhelmina.  They were sold to the highest bidders and the money went to the cause of victory at sea.

His behavior however was not always impeccable and his record shows he was sometimes subject to disciplinary measures for offenses like sleeping in an unauthorized part of the base that was above his rank and refusing with his shipmates to leave a pub at closing time.  He also got into a few scraps with dogs that arrived at Simonstown as mascots on visiting ships.   Since he was such a mellow chap, I believe those fights were the fault of the other dogs.  That is a guess, of course. 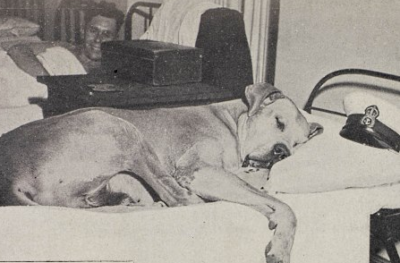 When he reached the age of seven, Just Nuisance began to show signs of paralysis and pain that worsened steadily, possibly the long-term effects of an accident when he was much younger.  Escort duties became too much for him to handle and he was retired. The naval veterinary surgeon at Simonstown found that little could be done for the big guy.  Sadly, he told Just Nuisance’s friends what they did not want to hear.

Just Nuisance was given a military funeral with full honors on the hillside overlooking the town .  His body was draped in the battle flag of the Royal Navy – the White Ensign – and guns fired a salute. A bugler played the Last Post as his grieving shipmates said farewell.

So he was was gone – but certainly not forgotten.  Today, he remains a legend in Simonstown, now the southern-most base of the South African Navy and the home of many pleasure yachts that cruise the blue waters of False Bay, famous for its leaping Great White Sharks you can see on the Discovery Channel.   Just Nuisance is as famous as the sharks.  The town erected a statue of their beloved Great Dane and a prominent plaque in the town square tells visitors that this was his home. 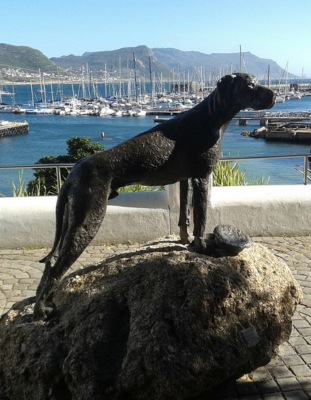 Once a year, early in April, a dog walk is held in Simonstown to honor the memory of Just Nuisance.  Any breed can take part – not only Great Danes.  Participants are asked to donate dog food which is given to those who need help.  A band marches along and a contest is held to choose the dog that most resembles Just Nuisance.  The atmosphere is festive, the mood is jolly – and it is certain that old Just Nuisance would have enjoyed the party.