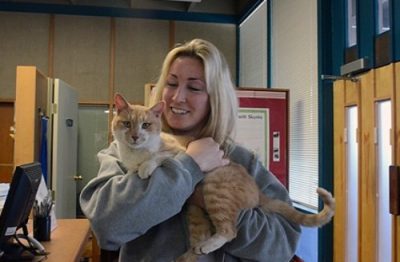 Jeanne Blum of Novato has been reunited with her cat, Junior, after six long months.

By the time Jeanne moved to Kentfield six months later, she had lost all hope.

It was during a stormy evening in early March that Junior showed up at the house of Peggy Chenoweth’s neighbor. Junior had been seen in the area for about a week, approximately five blocks from where his guardian used to live. Peggy, a long-time volunteer at MHS, brought Junior home with her and took him to MHS the following day. 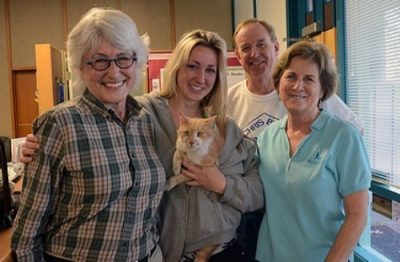 Because Junior has a microchip, we were able to locate Jeanne to let her know that her beloved cat was safe and sound at MHS!

Junior has settled back in at his Kentfield home with kitty companion Miko and dog friend Angie. “He was the missing link between everyone,” says Jeanne.

Junior’s reunion is a great reminder of the importance of pet identification. You can get your dog, cat or rabbit microchipped for a nominal fee anytime during our business hours.