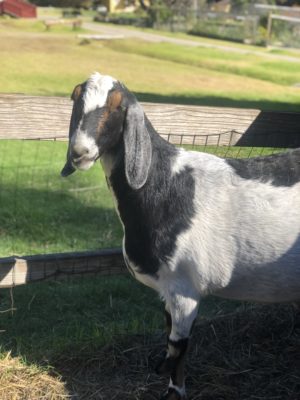 An interview with Susie Harper

It has become a common seasonal occurrence in Marin County, and all over the United States, to see goats grooming large swaths of land in order to clear it or make it fire safe. Goat rental and shepherding is now a booming business in California and of course with it comes local regulations with regard to animal welfare and attendant issues. But for the average citizen/lay person, the charm of waking up to the bleating of goats on a nearby hillside or the spectacle of them dotting a local field is quickly becoming a cherished spring/summer experience. Now, in addition to having chickens, you hear people say how much they’d like to have a goat. Or goats. But would they?

There is much to consider in the welfare of a goat – or goats. My stepdaughter Hilary spent a year on bio-dynamic farms in Italy learning to care for goats, milk them, make cheese and sell it at local farmers markets. Her dream is to have a goat farm. But she’s a smart young woman and struggling to make ends meet is not her jam. She is currently making her fortune in the tech industry. I’m sure the goat farm will materialize when the capital and proper resources become available. It is Hilary who introduced me to the charm of goats. But it is Susie Harper who makes me giggle over a goat story. So I asked her about hers.

Susie has regaled us with tales of her ACT (Animal Care Technician) days and a misadventure or two with snakes. Nowadays, Susie makes her living as a tax accountant and volunteers in a variety of ways for Marin Humane, including as a foster mom to cats, kittens, dogs and puppies. She’s an equal opportunity foster parent. Susie’s open heart extends to all creatures great and small (in 2018 I trekked up a mountain in Rwanda with her to see gorillas), so when she mentioned that her ACT education included learning to milk goats I was intrigued. 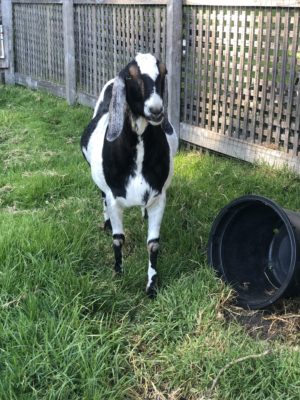 I know that local livestock occasionally find their way to Marin Humane and that goats and sheep are sometimes housed in the barn. I’ve even seen a horse or two in the paddock over the years. It seems like these animals grace us less and less often, but many years ago it was not uncommon to see what used to be called barn yard animals in the Marin Humane barn and paddock. So I asked Susie about just such a time.

What was your experience as an ACT with rescued goats?

One day, long, long ago, Marin Humane Society ended up with a bunch of goats – I’d guess there were 20 or 30 of them. I don’t remember why they came to us, but there were a lot of them. They were so cute! At that time, I was an ACT, and the goats had to be milked every day – by the ACTs,  so I had to learn how to do it.

Who on the staff already knew that much about goat milking?

I think we all learned on the fly. I’m sure a few of us had some prior experience. But I also think [Captain] Cindy Machado showed me a trick or two when I couldn’t get it going.

(Laughs) You can tug on a teat, but that doesn’t mean anything will come out.

Mostly, no. I did learn a technique. And I loved to lean my head against the goats’ side while I pushed and pulled, and milk came running out of their teats into my bucket. The goats were very easy going, I don’t remember having any trouble with them. Except when the milk wouldn’t come out…

Had you ever had any interactions with goats before that?

I have always loved goats, but never had any contact with them except in petting zoos.  I’ve been begging my son to get goats because he has acreage up in Loma Rica, just west of Grass Valley. He grows olives for olive oil, but he tells me the goats will climb up in the tree and eat all of his olives.

I know that when we have rescued chickens the eggs are collected and made available to anyone who would like them. What did you do with the goat milk?

I do remember that there was something wrong with the milk, so it couldn’t be used. I don’t know what we did with the milk before we found out it was bad. Maybe I was just the last one to know (laughs). But I remember being disappointed that we couldn’t use the milk. We could have saved some baby elephants or something.

Like at the elephant orphanage we visited in Nairobi?

Were the goats adopted out?

I have no idea what happened with the goats in the end. There were a lot of them, and if they couldn’t give good milk I wondered if anyone would want them. They apparently had to be milked, and who wants a goat that has to be milked and the milk isn’t good?

Hey I’ve adopted three legged and one-eyed dogs from Marin Humane. As long as a goat would trim my hillside I’d be okay tossing out some bad goat milk. Maybe Hilary has some ideas…