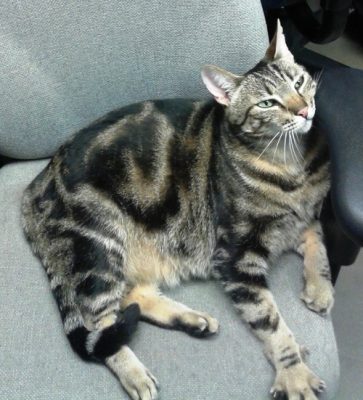 Once I arrived at the Kitty Corner, I was drawn to the condo on the far right instantly. Inside was this beautiful 16 lb giant tabby kitty named Angus. I got to sit down and hold him. I held firm to my resolve that I wasn’t going to get another kitty at this time. They said they could put him on hold but I said that I didn’t want to keep him from finding his forever home. That said, I called the following morning as soon as they opened and said I wanted him. I couldn’t get him off my mind. He was homeless in Fairfax, apparently, and had battle scars all over his ears. He definitely had a family at some point and was probably abandoned.

I took him home, and there’s some work to be done on the dog (I have 2)/cat relationships, but it’s been less than two months. For the first two weeks I took him to work-he is now named Tiberius, and everyone marveled at how cool he was. He’d sit in the office confidently and would sit on anyone’s lap who entered the office, including job applicants. He snuggles with me and the dogs at night. He demands treats constantly, and gets them, and seems perfectly content to be an indoor kitty now, safe from coyotes, or whatever else he used to have to fight out there. I love this new fat cat of mine.