One of our Dog Training Assistant volunteers, PJ Bremier, is also a correspondent for the Marin IJ. She wrote this piece about her experience volunteering at the Marin Center, published on November 1st:

“All year I am privileged to be invited into some of Marin’s loveliest homes and meet their owners, each with fascinating stories.

This weekend, though, I met people under far different circumstances; people who had been forced from their homes, uprooted from their daily lives, and taking shelter in the Marin Center Exhibit Hall in the wake of the recent Sonoma fire. 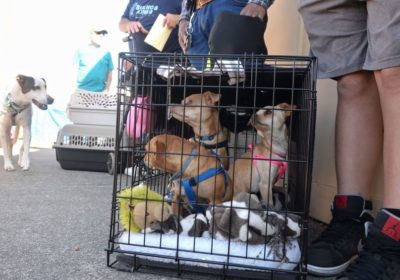 They were all tired by the time they arrived. Many had not slept for days. They were hungry, worried and unsettled.

I’m sure they all wanted for a nice hot shower and their own beds, but the only complaint from some was that this was the second time they’ve had to evacuate because of fire, and they were tired of it.

These were some of the most resilient individuals I have met.

I was amazed at their inexplicable patience, camaraderie and kindness to each other as they waited in lines — lines to register for temporary lodging on cots in the cavernous hall, interminably long lines for a hot meal and, for those who had brought their pets, another line to get them settled into the on-site makeshift indoor kennels set up and managed by the Marin Humane.

As a volunteer stationed at an intake table in front of the kennels on Sunday, I was honored to help these people register their pets and settle them into brand-new crates before parting with them for the night. 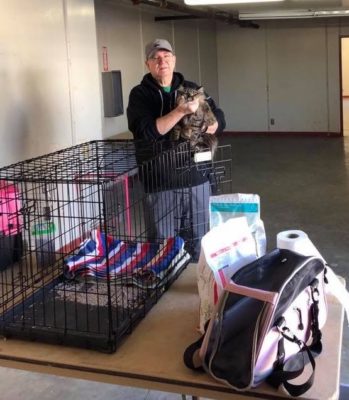 I thought it might be hard to witness the pain and troubles these people and their pets were experiencing but, as I filled out their paperwork, I noticed that it wasn’t a sad experience at all but, strangely enough, an uplifting one.

The tears I thought I might have to hold back had turned into smiles of hope for these people of indomitable inner strength and surprising good nature.

The first pet room quickly filled up and the remaining line of pet owners patiently waited, again, for another two or three hours before a second room could be opened and prepared.

I watched the people in line and saw singles, families, caretakers and their charges, groups of friends and people of all ages, backgrounds and cultures.

Some were perfectly healthy, while others were in wheelchairs, on walkers or on oxygen. They stood, or sat, on the sidewalk surrounded by their precious pets in boxes, travel carriers, held in their arms or on leashes.

At this singular moment in time, though, and despite their desperate situations, they were all the same. This group of evacuees only wanted to ensure that their family members — their pets — that couldn’t enter the main shelter, would be as safe and comfortable as they were.

The pet quarters were staffed by Marin Humane employees and volunteers who rotated throughout the day, monitoring the comfort of their feathered, furred and scaly guests, helping owners visit their pets and making sure crated pets got a chance to stretch their legs.

There were dogs and cats, a mother dog with her puppies, a couple of small parrots, bunnies and guinea pigs. At least two bearded dragons and four snakes were taken to Marin Humane’s facility in Novato for specialized care.

The first makeshift kennel room soon became the main kitty room and was significantly quieter than the adjacent room, where dogs of all sizes and temperaments were sheltered. The two birds were tucked away into a dim, quiet corner of a utility room, out of any draft, for their comfort.

We quickly learned from owners that each pet had its own quirks and preferences, with each owner hoping, but not insisting, that their pets unspoken needs would be understood and accepted. Disasters are humbling.

Some cats were super shy, or scared, and wouldn’t eat until they saw their owners. Other cats begged for attention, rubbing their foreheads against the front of the crates and sticking out a friendly paw.

There were a few dogs that didn’t like other dogs, so they were shielded to keep them less stressed. Most dogs barked when other dogs passed by as they went for a walk with their owners, but others were so calm that they just curled up and went to sleep.

Then, there was the pair of baying beagles that just did not like being crated and made sure everyone knew. We sympathized with them.

And, we sympathized with owners.

We heard how this would be the first time they’d be separated from their pet overnight; how a small dog got chilly at night and would need an extra blanket; how a pair of family dogs, such as the goofy pit bull and its small terrier “sibling,” would prefer to sleep together in a roomy crate than separate, and how some dogs were fearful and would rather not deal with anyone.

There were the expected barks and meows in the pet quarters, but there were also breathtaking examples of human kindness and compassion, of resignation and hope, and the most glorious moments when joyful owners came to redeem their pets, after announcing they could go home or had found a new place to live.

These were the stories of people in pain who transcended it by comforting — and being comforted by — their pets.

In those moments, when they were together, their whole family was united again, even if it wasn’t at home, but in a room full of crates, strangers and noisy dogs and shy cats. 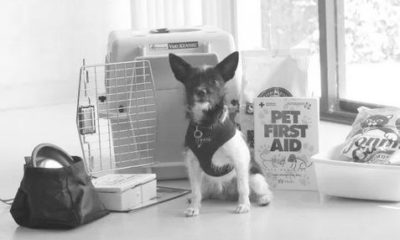 John Reese, chief administrative officer of Marin Humane, suggests that every pet owner has a go-kit ready in the event of sudden disaster evacuations. It can be a pet carrier that holds a good collar with an ID tag and leash, list of medications, food, bottled water and bowl, and vet records.

“It can make a big difference in the chaos,” he says. “And get your pet comfortable in a crate. In a disaster, they may have to be crated in the car, a shelter or a hotel, and crate training will keep them safe and comfortable.” Free crate training instructions, along with other pet training tips, are available at marinhumane.org.

Depending upon the weather and fire conditions, Marin Humane is preparing for a second influx of evacuated pets that need temporary housing either at the Marin Veterans’ Memorial Auditorium or at its facility in Bel Marin Keys. Boarding is free for pets of firestorm evacuees, as long as needed. If you need help, or can donate, call 415-883-4621.”