During the weekend of June 6-7, more than 10,000 cat lovers and fans, including myself, descended upon Downtown L.A. for the first annual CatConLA.

Part symposium and part expo, the two-day convention took place at The Reef, a modern event space just a few miles away from USC and a stone’s throw from Staples Center. Marketed as being “like Comic Con… but for cat people” the event drew people from as far away as England, featured Internet celebrity cat guests Lil Bub and Pudge, and had special appearances from stars including Mayim Bialik (Blossom, The Big Bang Theory) and Jack McBrayer (30 Rock.)

It was truly a celebration of all things cat; not simply a gathering of crazy fanciers of the feline, but of the evolution of cat love in art, pop culture, and social media in modern times. As one panelist put it, “not since the first ancient Egyptian decided to invite that first sleek Abyssinian into his home has the cat been so revered.” It’s a Mew-Renaissance!

LET’S TALK CAT, SHALL WE?
Two days of programming included presentations and panels with titles such My Cat’s a Celebrity… And How I’ve Dealt With Tha 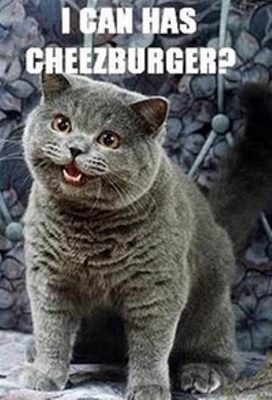 t; You Can Be a Cat Guy and Still Be Cool; Photographing Cats – It Looks Easy, But It’s Not; and Goodbye Dowdy, Hello Gorgeous: Debunking the Cat Lady Myth, all hosted and moderated by Keith Bowers, senior editor of Catster.com and Dogster.com. The latter presentation was introduced by Big Bang Theory actress and real-life neuroscientist Mayim Bialik, who was also at the Con to help promote the event’s cat adoption efforts.

The one presentation I was most looking forward to was How Cats Have Changed the Internet & My Favorite Memes hosted by Ben Huh, Founder and CEO of Cheezburger.com. Ben is a pioneer in the development of Internet culture as a form of entertainment and crowdsourcing, and for bringing the concept of memes to the mainstream – he is the man credited for creating the internet cat meme. He told his story about posting the first few cat meme images (including the now famous “I can haz cheezburger?” image that became the namesake of his company,) practically “breaking the internet,” and never expecting the tidal wave and evolution of cat memes he helped spur. He fielded questions from the audience ranging from server recommendations, the concept of cat humor, what makes a successful meme, to how people can best promote their own burgeoning cat internet stars.

SWAG, MERCH, and SOCIAL MEDIA ABOUND
There was a strong social media aspect which is common in most conventions these days. However it served not only as a way to live-market the event, but for folks to also share their cat love or enter raffles and contests. Animal Planet was live-streaming the Con on TV, and booth signs around the floor as well as convention staff encouraged attendees to use #CatConLA, #InstacatAPL and other hashtags when posting on Facebook, Instagram, and Twitter. 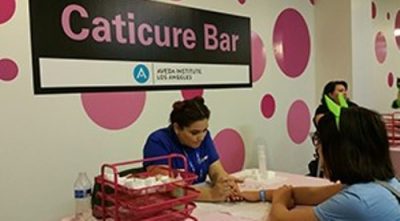 Almost 100 vendors from all over the country and the world were selling their wares, and wandering the (very crowded) merchandise floor I noticed that anything and everything was represented, from “cool cat” clothing lines and accessories (for humans AND animals!), to artwork and stationary, to toys, games, and lifestyle products (again, for both felines and the humans that love them.) There was even a row of “Caticure” stations just in case your nails needed a little sprucing up! I also noted that the purveyors seemed very carefully curated, which I later discovered was indeed the case. Susan Michals, the event founder, vetted each potential seller personally, as she wanted the products sold to reflect the “modern cat lover” – youthful, hip, and with a finger on the pulse of what is trendy and trending. Many of the sellers also sold their wares on Etsy.

Some of the products available included modern design cat towers and hide-a-beds, t-shirts featuring cats in cool clothing (straight out of the UK!,) yoga mats for your cats, kitty bow ties, specialty litter and pet food, mega-meme and comic star Pusheen trademark merchandise (that booth was packed all day), and even the Kittyo, a device that lets you remotely interact with your cat via smart phone; talk, give treats, and wave a laser pointer to Fluffy from your work desk – all for $249!

Have way too many live cats at home, or can’t adopt a cat right now? How about getting a Zoomer Kitty, the interactive robot cat for $100?

I walked into the booth for a clothing brand called Pretty Snake late in the afternoon and came face to face with Project Runway contestant Joseph Aaron Segal. The Pretty Snake label is his line of avant-garde, cat-centric couture. I shook his hand, told him I was a huge fan, and mentioned that I noticed his googly-eye, multi-cat men’s sweater seemed to be a big hit – I saw it on more than one male torso on both days. His response? “We’ve been making brisk business on that piece alllllll day!” 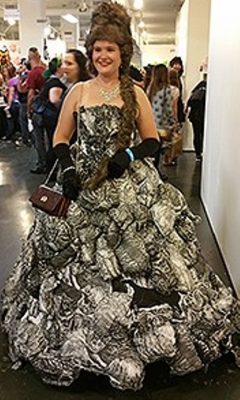 Speaking of fashion, it was rare the attendee who wasn’t donning some form of apparel to advertise their kitty affinity. From the subtle black wire cat-ears to one woman’s full-on “crazy cat lady” ball gown get up, men and women alike walked the floors in solidarity and inclusiveness, showing their cat love pride. (I straddled the middle ground with cat ears and cat-themed tops, if you must ask.)

Several of the vendors offered apparel and accessories that were downright tasteful and fashion forward. Two that stood out were Meowingtons, an online fashion and home goods store whose target market leans towards the Gen X and Millennial population, and Triple T Studios, a brand with gorgeously luxe handbag and accessory lines for every taste and price point.

And yes, there was prolific male representation, again, helping to dispel cat lover stereotypes. (I estimated 60% women, 40% men on both days.) Men were not attending the Con as guests of their female partners, but as cat fan attendees in their own right. During the presentation You Can Be a Cat Guy and Still Be Cool, Keith Bowers brought up the 4 C’s of coolness: Clothing, Confidence, Comedy, and Compassion. The 5th C goes without saying: “Cat Love.” At one point, he asked a hypothetical question of the audience: “Why should we love cats?”, to which four young boys sitting in the front row, all wearing cat-themed t-shirts, yelled out in unison, “Because cats kick ass!”

“TAILS” OF THE FURRY AND FAMOUS 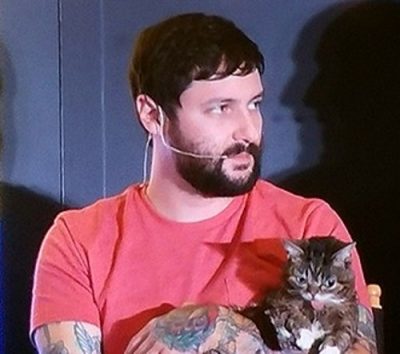 Meet and greet areas located in the rear of the convention floor allowed attendees to get books signed from guest authors or to shake hands and get a selfie with presenters. However, by far the biggest draw that weekend was mega cat celebrity Lil Bub.

The four-year old Lil Bub was adopted by Mike Bridavsky from a rescue who found her as part of a feral litter born in a tool shed in rural Indiana. Bub was born with several genetic anomalies – excuse me – special traits, including an extreme case of dwarfism that keeps her forever “kitten-sized.”

Over the course of the last few years, Lil Bub had taken the internet by storm with her own YouTube channel, Instagram feed, and on Facebook, with her page generating almost 2 million likes. All of that fame also serves as a vehicle for her owner Mike to promote cat adoption, spay and neuter, and rescue.

Lil Bub is so famous that separate tickets were sold for her meet and greet, which would involve a few minutes of snuggles, pets, and selfies, as well as VIP access to the remainder of the event. These very limited number of tickets cost $150, with $100 of each ticket going to Lil Bub’s charity Big Fund, and FixNation, the main nonprofit beneficiary for CatCon. The tickets sold out online within minutes.

Everywhere Lil Bub went, cooing, aww-ing, and squeals of excitement followed. She and Mike were also the presenters of the last panel of the weekend, Lil Bub’s Big Show, a spoof on the late night talk show featuring special guest star Jack McBrayer of 30 Rock fame being interviewed by Lil Bub herself. The line to this presentation snaked out and around the floor, and several attendees were unable to get into the filled-to-capacity presentation room and had to watch the show via live video feed from an overflow seating area.

PROMOTING AWARENESS, SAVING LIVES
It wouldn’t be a proper cat-lovers conglomeration without the presence of rescue charities and cat overpopulation awareness and education organizations.

In addition to the aforementioned proceeds from Lil Bub’s meet and greet package, $1 of every general admission ticket sold, and a percentage of all vendor proceeds, went to FixNation, a nonprofit organization committed to reducing the homeless cat population through Trap-Neuter-Return.

One of the vendors was the Paw Project, a nonprofit whose mission is to “educate the public about the painful and crippling effects of feline declawing, to promote animal welfare through the abolition of the practice of declaw surgery, and to rehabilitate cats that have been declawed.”

Best Friends LA was also present with a separate enclave on the floor that served as a dedicated cat adoption area, which expectedly was very popular with Con-goers. To keep cat stress to a minimum, BFLA staff and volunteers allowed only a select number of attendees in the area at a time, and people had to wait in line for their turn to visit the adorable cats and kittens. At one point attendees were waiting upwards of 45 minutes to get their chance to say hello, and perhaps consider filling out an adoption application while they were at it.

AT THE END OF THE DAY…
Near the end of the event on Sunday, Susan Michals came onstage before Lil Bub’s Big Show to make a several announcements. One, that the event was sold out, and that she and the other organizers exceeded the expectations of what they aimed to raise for FixNation; two, that Best Friends LA had adopted 54 cats at the time of the announcement and they “ran out of cats and had to drive back to their offices to get more” (end of day numbers have since exceeded that initial count;) and three, the first ever CatConLA was so successful they were bringing it back next year. Cheers from the crowd were deafening.

All in all, it was a wonderful, exhausting, and celebratory weekend. As Jen Yamato wrote in her article for the Daily Beast “(the) plucky, new-Internet spirit of the two-day event (was) designed to dispel the cat lady myth and make cat fancying cool.”

Indeed, Michals was quoted as saying, “When Comic-Con started, people just saw it as something for geeks and freaks and nerds. It expanded to being a mecca for making announcements for every (entertainment) studio in the world. It has gone from being geek to chic.” She hopes that CatCon would follow where Comic-Con blazed the trail.

“The idea behind (CatConLA) was to change the perception of how the cat lover is viewed; when you say you’re into cats, people think ‘crazy cat lady.’ That’s not a bad thing per se – look at Taylor Swift – she’s the ultimate cat lady right now and proud of it. So CatConLA was really borne out of showing the world there’s people, products and pop culture activities out there that in essence, dispel the ‘Grey Gardens/Eleanor Abernathy’ dated persona. Even the look and feel of the event will be unlike anything seen at a convention/expo before.”

The weekend was a testament to the overwhelming success of that goal.