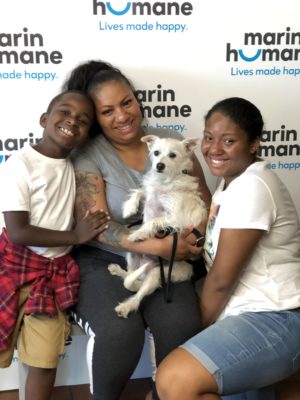 For those of you who attended the Volunteer Party in June, you’ll remember the sweet video about Caspar. After nearly a year in our care, Caspar was adopted on July 23rd!

If you haven’t seen the video, it tells Casper’s story of arriving at the shelter on September 2018, unable to walk, and the months of medical treatment, fostering, and TLC by many people so that he could rehabilitate and heal.

We want to share a bit more about this VERY happy ending! A nurse who works in San Quentin  adopted him. She originally met Casper at San Quentin and and fell in love with him. When he was ready for adoption, she and her two kids came in to spend time with him, learn about his medical needs, and take him home.

But, one of her sons had a different idea. He was very afraid of dogs. So, at first he hid out, sitting on a bench playing video games. Soon enough, though, he was lured closer by the sound of kittens mewing in the adoption lobby. Enjoying the interaction with kittens, he loosened up and got more comfortable. Eventually, adoption staffer, Laura Eckhard, called him over to meet Catherine Tryon’s dog Widget. Dear Widget, in his sweet way, he gave this little boy hope that dogs are okay. 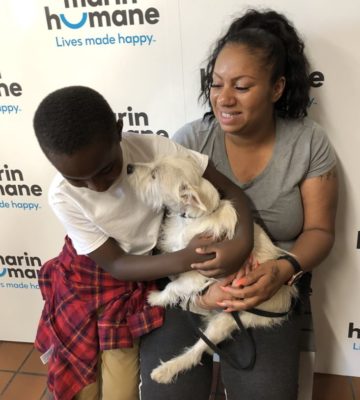 Laura then took him under her wing and showed him the books that volunteer Kathie Meier had made with photos of the Jumping for Joy class and the kids photography class.  Eventually, he was comfortable enough to get close to Casper. 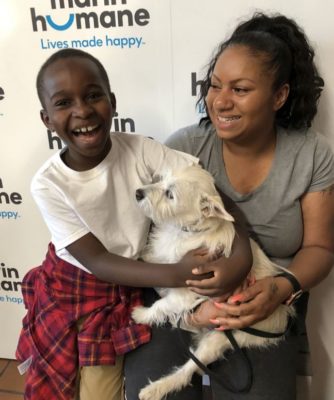 By the time the adoption was finished and it was photo time, he allowed Casper to lick his cheek and he gave Casper a hug!  It was a beautiful moment and there were plenty of tears shed!  Casper has touched the hearts of so many here at Marin Humane and he is going to change this family’s world, too.

Thanks to so many staff and volunteers who helped make this miracle happen!