We have a boss cat. Do you? Not clear on the concept? Here are some key questions to consider:

If you answered yes to any of the above questions you might have a boss cat. I answer yes to all  of the above. And I wouldn’t trade my answers for love or money.

This is Lorenzo. He is a boss cat. And the best thing about him is he’s a benign boss. Best boss I ever had. Lorenzo was born to a semi-feral mom outside a veterinary clinic in the town of Petaluma, California in June of 2004. I see you’ve already done the math; he’ll be seventeen in a couple months. He still rocks a game of “make the bed” and keeps the neighborhood dogs, along with countless fosters, in line.

Around the time Lorenzo and his twin brother, Lucca , were born my step-daughter, Hilary, was living down the street and caring for a mouse she had found in her kitchen. Kids. During a consultation with the vet about the care and life span of a wild mouse, she was introduced to the kittens. The vet had kept an eye on them and their mom and was looking for a suitable home so that they might not grow up feral. The mouse soon found himself back in the wild and Lorenzo and Lucca found themselves in a loving home. At that time, they were called Ike and Mike. I think Lorenzo was Ike. At any rate, shortly thereafter, Hilary’s marriage sadly ended. In the process of re-inventing her life and enrolling in UC Berkeley she came to stay with us while she figured out her next housing move. Since Hilary had custody of the cats she renamed them with an Italian flair and brought them with her to “visit” Grandpa and Grandma. They were a year old.

The cats proved a lively addition from the start. At that time, we had two dogs, Daisy and Maybelline and a senior cat, Atticus. I knew we were in for fun when on her way from Petaluma to San Rafael Hilary called me from her parked car in Novato to say that Lorenzo had escaped from his transport box and was loose in the car wreaking havoc. She had gotten off the highway for safety and was parked at the Community House completely stressed and panicked. She was afraid to open the car door for fear he’d escape. I sped to the scene to find Hilary trying to calm Lorenzo while Lucca remained yowling inside his box. Humor was not on the menu. I brought a crate with me, so we managed to secure Lorenzo in a more escape proof container and get him safely to our house.

That was day one. In the subsequent 5,655 or so days since Lorenzo has proven to be as lively, challenging and anecdote producing as that day in August 2005. He has also proven to be hilarious, entertaining, crafty, downright dexterous and a gifted hunter of rodents. I’ll start with lively. Even approaching 17 this guy can still get it on with a wand mouse. But his favorite sport? We call it “make the bed.” Forget about your fancy Pet Food Express toys. What are those to a true innovator of fun? Lorenzo likes to play with the discarded lint roller sheets that I peel off the lint roller (which I use to remove HIS hair from the duvet cover), crumble up in a ball and toss. He can bat one of those babies clear across the room. Hours of fun.

Oh. Did I skip over the part where Hilary went on to finish her BS at Berkeley, got an apartment in the East Bay and left the cats with us? But you knew that. Kids. I’ll also skip over the day we lost Lucca at the tender age of five. Too sad to dredge up. But I will say this. Before Lucca died Lorenzo always seemed like the evil twin (I called him Lorenzo De Medici). He was just so naughty or seeming to plot terrible plans all the time. After we lost his twin brother, Lorenzo started to fill the goofy, fun loving space Lucca had occupied. He also grew closer to our elder statesman, Atticus, a boss cat in his own right who ruled our neighborhood after a fashion and walked around the block with us almost daily. It was nice to see the two of them hang out together.

You don’t realize how insanely you’ve tailored your life to your pets (or your quirky home for that matter) until you write out instructions for a house sitter. This is a real excerpt from one of our instruction sheets: “Lorenzo should NOT be in the kitchen unsupervised. He can open cupboards!” This is an actual fact not to be ignored. Nevertheless, how many times has a pet sitter texted me: “OMG you were right. He opened up the pantry and broke into a bag of tortilla chips.” Yep. Ditto bags of dog food left unattended along with doggy training treats. But you know, lean in, I say. I’ve taught him to sit for a treat. So when we get home from our dog walk everyone – and I mean however many dogs there are plus Lorenzo – sits for a treat.

A brief but colorful sample of Lorenzo’s exploits includes, but is not limited to, stealing butter off the counter, drinking from the toilet (#catdog), opening drawers to locate hidden cat food, hanging out behind the dryer (what the heck?) and making friends with a family of foxes (if my observant neighbors are correct and not prone to hyperbole Lorenzo was showing the foxes his yard). Visiting neighbors, greeting all guests with an invitation to pet him and sleeping with overnight guests are just some of the ways Big L endears himself to humans – even those who claim they don’t care for cats. After our regular Saturday walk, my friend, Nancy (not a cat person AT ALL) wants to know, before I hand her coffee, “Where’s my boyfriend?” She is not referring to my husband, Dave.

Previously in this space I’ve talked about the myriad foster dogs who grace our lives on a regular basis. Most of these are dogs whose anxiety levels are higher than average. Many of them think of biting as a reasonable way to handle their fear. In almost every case what is needed is a non-shelter (meaning low stress) environment where these dogs can gain confidence and trust and be given an opportunity to be their best selves. The foster dogs benefit from the presence of the other dogs in our home. This dynamic dramatically shortens their learning curve. Lorenzo is also key in these fosters’ lives. We learn first hand whether or not the fosters are super cat focused or “cat problematic” and they learn to hang out with a cat. Or at least a very specific type of cat: a boss cat. Lorenzo’s usual MO is to hang around and sometimes give them the “come on I dare you” sit and stare. Very occasionally, however, it’s apparent that Lorenzo doesn’t want to be around one of our foster dogs. When Lorenzo is wary that’s a good heads up to us that this dog might have more issues than we bargained for. Lorenzo is an excellent barometer.

The best part about writing about Lorenzo for this blog is that he is still with us. All too often wonderful pet stories come in the form of eulogies. I’m happy to report that his bi-annual health check up last week was stellar. All his blood work is great and he appears to be in good health. (About 3 years ago, Lorenzo had a carcinoma removed from his ear. He’s been clean ever since; so far, no sign of recurrence.) Seventeen, here we come!

We have been blessed over the years with people-friendly, dog-savvy, playful, resilient and affectionate cats. Lorenzo is the current sovereign and we couldn’t want for a better king. Or Boss Cat, as it were. If we have to answer to someone, we’re glad it’s this guy. 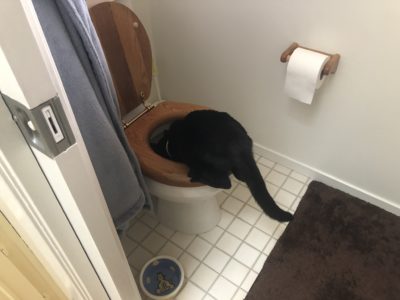